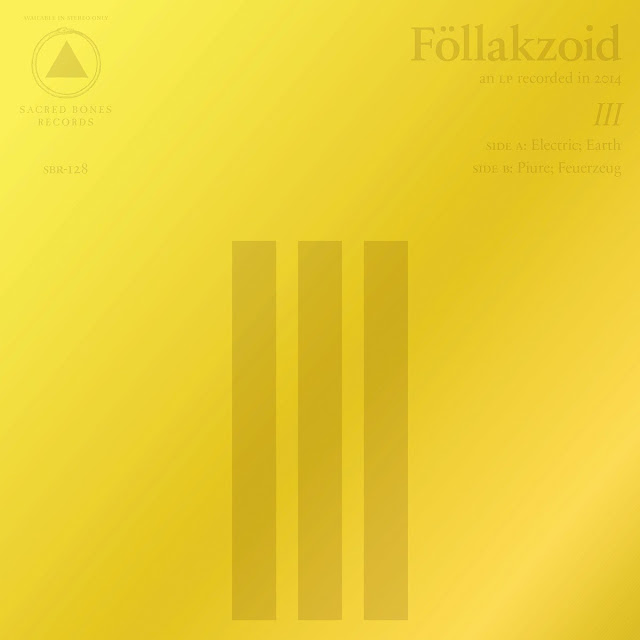 The shimmering cover art of the latest release from Santiago, Chile’s Föllakzoid, "III", depicts three monolithic posts, simple and mysterious – because surely there must be more to it than simply the third official release. (Interestingly, this is the first of Föllakzoid’s albums not to feature vibrant, celestial clusters.) Likewise, listening to Föllakzoid, one can’t help feeling there’s more at work than what the four piece has presented: four long (each hovering around the ten minute mark) songs that buzz and build around primal bass riffs and sprawling, eclectic rhythms. Like their earlier releases,"III" continues the trend: Krautrock-inspired, minimal psych with nods to traditional music of the Andes – particularly notable in pattern and rhythm – and soaked with reverb and delay. While "III" maintains the dark grooves of "II", the four new tracks are more upbeat with wide open grooves. I’ve played this album more than any other in the weeks since its release.

There’s some interesting press surrounding the origin of the band, which came about, according to the four members (all of them friends since childhood), after a two hour non-stop jam they describe as “a trance experience […], sort of a soul abduction in which they’ve been living since 2008” as well as this record: "III" was recorded and mixed by the band first before they partnered with Atom TM for assistance with the album’s synths. According to the Sacred Bones Records website, “The Korg synthesizer Atom TM plays […] was used by Kraftwerk on tour in the ‘80s.” The band posits as well that South America is “able to dialogue directly with other places, times, and dimensions,” giving us all the proper context for understanding the band’s goal: transportation. Another time, place, history.

So, whatever you think of all that, Föllakzoid’s "III" seems to have had the effect of a beacon; people have taken this album up like no other – incredible considering its long-song aesthetics, sparse and gossamer vocals, and hypnotic repetition designed for the determined listener. I’ve heard this album played in more record shops since its release than any other album in recent memory; I’ve even heard it in a restaurant in Los Angeles. It’s a testament to Föllakzoid’s music that it has with this latest release, become somehow more accessible without compromising their distinct atmospheric sound.

Föllakzoid is currently touring North American and hits Europe in June. "III" is available here on vinyl, here on CD, and as a download through the Bandcamp widget below (where you can also stream the whole thing for free). If you want to ask at a local record shop, the name – it took me a while to find – is pronounced foll-ack-zoid.

This is one of my favorite releases of the year.