Eyes of Blue - Crossroads of Time / In Fields of Ardath 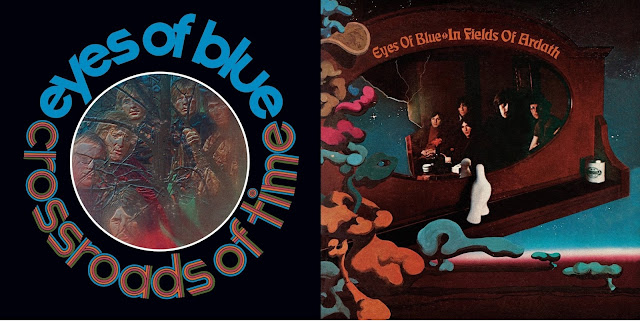 Initially a soul outfit (what else could they have started as with that name?), Welsh six-piece Eyes of Blue escaped an unhappy time on the Deram label, signing to Mercury just as they'd discovered the sounds of the US West Coast, amalgamating those influences with some much closer to home - UK psych -pop and the nascent proto-prog of the Moody Blues. In the process they became one of the very first groups to play what was becoming known as progressive rock. "The guys from Yes would come along to our gigs, stand at the back and make notes" says drummer John Weathers in all seriousness.

They made two LPs for Mercury, both of which have just been freshly reissued on CD by Esoteric Recordings, who are developing a peerless catalogue of UK progressive classics from lesser known names.

Debut "Crossroads of Time" starts off with a bang, with the percussive Graham Bond penned title track being something of an epic, but rather than frontloading the album, it acts as a sampler of the scope of what follows. Recorded in 1968 and released early the following year, there's still plenty of psychedelia to be found amongst the more progressive elements here - particularly the startling, Eastern guitar breaks of "Prodigal Son" - as well as cleverer-than-most vocal arrangements (put to great use on an inventive cover of the Beatles' "Yesterday"), and heaps of Hammond organ. Memorable songs too, and an excellent debut all around, which often reminds me of what a Welsh-born Spirit would have sounded like.

Later on that same year, the band's second album "In Fields of Ardath" appeared, a much more experimental and progressive album, with the band's growing confidence leading them to take a greater degree of control in the mixing room, as well as a more collaborative approach to the songwriting. "After The War" and "Door (The Child That is Born on the Sabbath Day)" are a step in a heavier direction, with doom-laden passages which ought to appeal to fans of occult-rockers like Black Widow. Elsewhere there's a lightness of touch on the bewitching wordless vocals and sumptuous jazz chordings of "Extra Hour" which show the bands willingness to stretch themselves in more than one direction, creating an impressive, visionary opus in the process.

It's a great swansong for the band, assuming one ignores the underwhelming followup as Big Sleep in 1971, which would be generally for the best.

All you need to know about the band is contained within these two splendid vessels, and as we've come to expect, Esoteric's new editions are definitive, with an excellent remastering job and thorough, informative liner-notes. My highest recommendation.