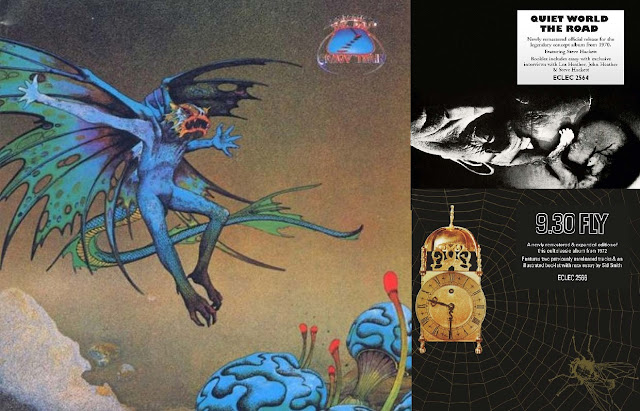 These pages often feature reissues from Cherry Red Records' Esoteric Recordings imprint, but I don't think I've ever specifically given them a pat on the back. This simply will not do, as the label are providing an amazing service to collectors of lesser known progressive rock, and to the artists that created these albums originally.

They've been systematically rescuing gem after gem from shady quasi-bootleg reissue labels, remastering from the original master tapes whenever possible, and ensuring that the artists and copyright holders are paid royalties for their troubles - something that a lot of fairly well known genre reissue labels that you'd assume were legitimate have chosen not to do in the past.

Their latest batch of releases are a typically intriguing bunch:

First off the blocks (and following on from last month's "Second Birth") is Gravy Train's fourth and final LP, "Staircase to the Day". "Staircase" is probably the band's least progressive outting but in terms of songcraft it's still got some chops. "Starlight Starbright" is a big, bombastic opener, while the earnest "Bring My Life On Back To Me" sounds like it could have become an FM staple if it had been attached to a more widely recognised name (or a label with a greater promotional budget than Dawn Records could muster).

The female backing vocalists (including PP Arnold) give much of what's on offer here a proto glam twist which is very much of its time, something that they'd investigate at even greater length on their final single (appended here as a bonus track) which sounds a little like Cockney Rebel.

The flute and fuzz guitars are mostly toned back a little more than I'd like but there's no arguing that the title track is one of their best tunes - almost as if Metallica's "Call of Cthulhu" had been written by the Alan Parsons Project.

And that Roger Dean sleeve is exquisite.

Quiet World's debut "The Road" is one for all of the Genesis fans out there, featuring the guitar work of Steve Hackett although those expecting the complexities of his work with Genesis may be surprised by how direct he is here (his first time in a studio).

"The Road" is a heavily orchestrated proggy concept album spearheaded by brothers John, Lea and Neil Heather. The Moody Blues' "Days of Future Passed" seems to be a major influence, but this is much less gentile sounding.

The religious slant of the concept is likely to get on the tits of some, but there are some effective songs contained within this suite.

Last in this batch, and pick of the bunch in my humble opinion is the sole self-titled album from the puzzlingly monikered 9.30 Fly. Chiefly a vehicle for husband / wife duo Michael and Barbara Wainwright, this is usually referred to as a progressive folk album, but it's folky tendencies seem minimal to me, the only real qualifier being the extensive use of acoustic guitars and Barbara's vocal phrasing.

It's got that great UK early seventies vibe that makes me think of musty books and rain in a similar way to Ginhouse's excellent sole LP, and a surprisingly progressive vibe given its reputation. This isn't any of that busy Yes style prog though, think slow, majestic builds with effective instrumental passages that make the most of clever arrangements to cover up a minimal recording budget.

Both Wainwrights sing, with Barbara stealing the show more often than not. Her simplistic keys offer some effective shading here and there too, with extensive mellotron usage on "Brooklyn Thoughts".

Highlights though come in the shape of "Unhinged", a brooding menace with lovely lyrical guitar leads ala David Gilmour shrouded in Barbara's wraithlike harmony vocals. Very striking. And the much more upbeat "Summer Days" isn't too far off the pace, especially when it stretches out into its luxurious instrumental passages.

This one was a bit of a surprise and a real grower - I find myself subconsciously reaching for it which has to be a good sign.

What will Esoteric have in store for us next I wonder?