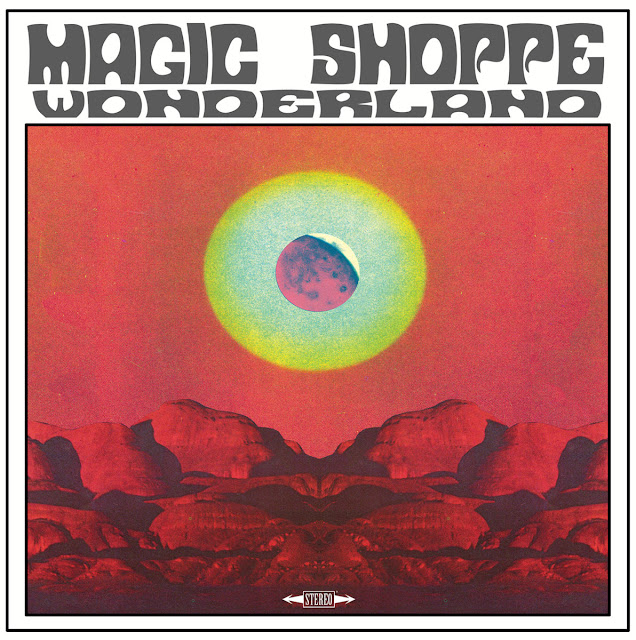 Reviewed By Todd Leiter-Weintraub (Hop On Pop) and Joseph Murphy

After teasing us with a 4-track EP earlier this year, Boston’s Magic Shoppe has unleashed its newest full-length, and it’s a corker. Blending together the modern psych sounds of bands like The Brian Jonestown Massacre with the full-on sonic assault of The Warlocks, it’s one of those albums that reveals more and more of itself with each listen.

The album opens with the nasty fuzztone and wah-wah riffing of “Stars Explode”—pure heavy psych a la The Warlocks. But when the arrangement shifts just a little, all sorts of nifty harmonic constructions reveal themselves, reflecting the influence of nothing so much as "Daydream Nation"era Sonic Youth. “Head On the Floor” follows, with the same kind of SY riffing, but here it’s the bassline that drives the song forward. Yeah, the guitars are front-and- center, of course. But when I find myself bobbing my head, it’s to the rhythm of the bass guitar. “Kill” explodes out of the speakers next. It’s a 12-bar blues-based vamp with super-saturated reverb-heavy vocals over a tremolo guitar—Rock, with a capital “R.” The beautifully arranged guitars are stacked on top of one another like the layers of a delicious cake made of fuzztone and rhythm. It’s easy to get lost in this one.

It’s also easy to get lost in the vocal harmonies of “Hearing Voices.” Those vocals, while intriguing, are buried in the mix, so as to beckon the listener closer. As you do get closer, the song sucks you in to its sonic landscape and wraps you up in warm, fuzzy layers of guitars and reverb. Full immersion.

“Blowup” gives a bit of a respite from the fuzz. Some great staccato riffing, punctuated by tambourine reminds me a little but of what The Limiñanas have been doing on their recent albums. “Sister Burden” has some quieter moments, but those moments are more like floating in the sea of sound, before the song kicks back in and, again, you’re swirling in the whirlpool.

I’m supposing you get it, dear reader, that the operative words here are “fuzz”, “layers”, “guitars”, and “reverb.” Magic Shoppe has concocted a glorious wash of sound that envelops the listener; pulling you in, and bringing you into the band’s world. But then, less than 30 minutes later, when the album ends and you’re thrown back to reality, all you want to do is dive back in again. It’s a nifty trick, indeed. And it’s a really, really good record. (TL-W)

Boston’s Magic Shoppe has been around for a while. All that time, they have quietly released subtle, layered – and often noisy – rock albums. Yet this year’s releases – “Interstellar Car Crash EP” (reviewed here) and most recently “Wonderland” – feel like a breakthrough for the experienced group.

Since their first EP, “Reverb,” released way back in 2010, Magic Shoppe has made significant tailoring to their repertoire of sounds. While “Reverb” sampled their many branches of influences and possibilities, their most recent releases are a testament to their honing of their skillsets, which inevitably developed into what has become their singular trademark: tone-perfect rock. But, of course, some things remain the same, seeds of things apparent even on “Reverb”: on “Wonderland,” guitar still reigns, and all guitar sounds are put through a gauntlet of effects, amounting to a sprawling reverb that cavernously shimmers but grinds when necessary too.

Opener, “Stars Explode,” jumpstarts the record, pounding hypnotic rock grounded by tambourine and light-handed vocals. It paves the way for equally propulsive songs such as “Kill,” while still setting up for a few of swaying, spaced-out pop songs that really make the record great.

Standouts “Blow Up” and “Sister Burden” channel West Coast shoegazers such as Brian Jonestown Massacre or Medicine equally. Melodic, upbeat, “Blow Up” plays with standard structure – and our expectations – both in vocal delivery and a searing, dense passage of guitar between verses. While “Sister Burden” saunters across similar ground, it leans toward chilly washes of guitar sound over the warmth of its predecessor. It experiments further with structure and layered landscapes as a means of exploring mood and content; and it works quite well here.

All in all, “Wonderland” is a joy for close listeners, pitch-perfect and finely tuned. This one’s a necessity for those headphone clutchers.  (JM)

“Wonderland” is available digitally or on red vinyl.