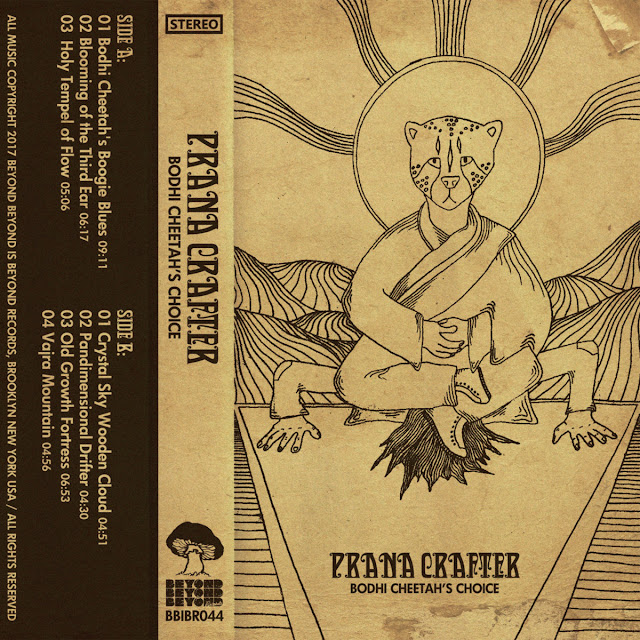 Prana Crafter, the one man psych project of Washington Woods resident William Sol, has provided some of the most visceral and exciting guitar based releases of recent times. 2015’s haunting yet ferocious ‘Rupture of Planes’ and 2017’s atmospheric and detailed ‘MindStreamBlessing’are perfect introductions to Sol’s work and ‘Bodhi Cheetah’s Choice’, just released on the splendid Beyond Beyond is Beyond label, is more than equal, an able and essential counterpart.

The album opens with ‘Bodhi Cheetah's Boogie Blues' amidst an explosive churning of molten guitar, sparks and debris scattering and dissipating, until an unholy scorched earth blues tears along the horizon that is both distorted and thrillingly exciting. Like fellow travellers Six Organs of Admittance there is an (un)easy alliance and movement between effective moments of calm, genuine beauty and melting, corrosive guitar work. Both add tension and power to the other in turn. Midway through this nine minute opus a saloon style piano emerges and picks out a lonesome and haunted melody, framed by a backdrop and symphony of feedback and waves of electrified hum. Gradually, the twisted blues refrain returns and fades, leaving a distinct impression of something primordial stalking the land, a roar from the woods themselves. This is music from the mud, the roots and the gut. 'Blooming of the Third Ear' follows, beginning at a canter with percussion framing the reoccurring harmony and swells of analogue synth, not unlike the theme from some folk horror western. Footsteps and distant voices merge into a Floydian cosmiche mass of keyboards and chimes before fading into a delicate and ghostly guitar motif that truly lifts the hair on the back of the neck. William Sol has an unnerving skill of making his music sound both intimate and universal at the same time and this track speaks of the vast emptiness of the night sky above the Washington Woods as much as it sits alongside you by the campfire.

'Holy Temple Of Flow’s melancholic keyboards and trebly guitar notes remind this listener of the atmospheric and spooked apocalypses of Godspeed You Black Emperor, the track morphing mid song into a furious, electrified solo that seems to summon the end times in all its wrath and anger. Here again is the dichotomy in Prana Crafter's carefully wrought songs; the quiet and the storm. 'Crystal Sky Wooden Cloud' is a case in point, its urgent acoustic rhythms and intense string bending propels the track into terrain inhabited by the likes of Jack Rose or Sun City Girls, before the clouds part and a quiet, reflective harmony breaks through. Next, 'Pandimensional Drifter' echoes into being, unhurried and deceptively languid until a truly epic guitar and organ melody arise from the darkness of the forest. Sounding not unlike an unhinged and inspired Ennio Morricone, in an album full of highlights this perhaps stands as a pinnacle moment. There is genuine dread, tension and release distilled here as the guitar howls against the encroaching night and the darkening of the woods.

'Old Growth Fortress' pits urgent piano against dynamic, multi layered guitar runs that you can feel in the pit of your stomach; indeed, there is real emotional force to these songs, something not always associated with instrumental or guitar based music. This distorted crescendo builds to almost Sabbath-ian proportions until a mournful drumbeat brings the piano back for a bare, funereal conclusion. Both affecting and exciting, you need to hear and experience this; the powerful ebb and flow of Prana Crafter. Finally, closer 'Vajra Mountain' is a brooding acoustic mantra, cascading waterfall like into calmer pools before descending and swirling, bubbling once more. As a conclusion it is as breathtaking as any of its predecessors and serves to remind the listener of just how special this album is.

Prana Crafter have once again sent a missive from their forests that both resonates with and transports the listener to their world and their surrounds. Whilst close and intimate at times, there is something larger, grander and more cosmic suggested in the nuances and scale of their output and vision that marks Prana out from other travellers on the same roads. William Sol creates a spell that seems both ancient and eternal, something human and something endless. Join him; you will not be disappointed.

Available now as a limited cassette and download now: