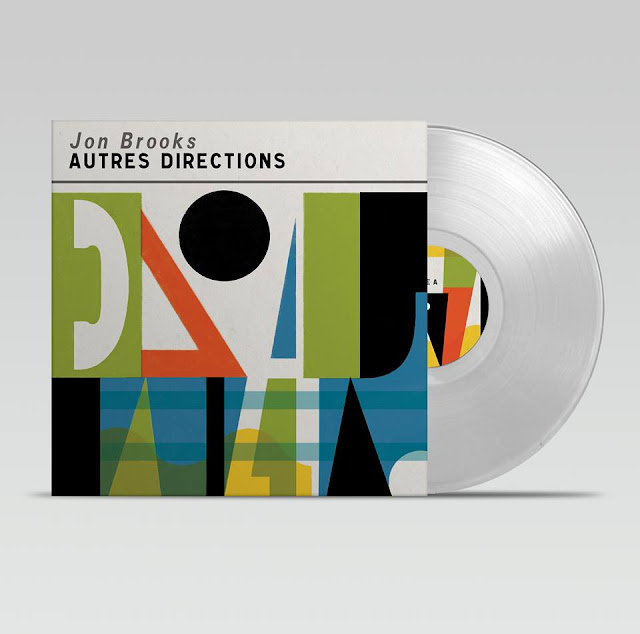 Ah, Spring 2017 is almost fully upon us and like the blooming daffodils, Clay Pipe Records has emerged from hibernation to herald the real new year with another beautifully evocative offering from Jon Brooks. As with Jon's previous outings on the label ('52' and 'Shapwick') there is a strong sense of conceptualisation and sonic impressionism (or audio cinema verite if you like) that informs 'Autres Directions'. In this instance the new offering is inspired by time spent by its creator in Brittany and Normandy in northern France. And perhaps this sleek, beautiful organic, wonderfully alive and textured work is a prescient love letter from post-Brexit Britain to its soon to be divorced European counterpart?

Musically there is much to place the record in the ongoing artistic development of its author. Part episodic series of ethereal soundscape canvasses, part field recording driven hauntological essay, part ambient/prog reinterpretation of the kind of approach the likes of Pink Floyd, Harmonia or Eno were aiming for in the 1970's - In totality it reflects all of this whilst retaining its own robust identity and makes for a deeply immersive sonic experience that reveals great depth with repeated listens. Read on active listener, read on...

'Se Reveille' calls us to rise with a cluster of brightly repeated notes, concluding with the perfect intonation of our French ferry announcer advising us that our journey across La Manche is about to conclude, our arrival on the north coast of France imminent. We make landfall by 'Le Chateau' where gentle analogue waves lap on the shore beneath the castle walls. This is probably my favourite piece on the record with its warm droning filigree of notes evoking nothing simpler or more beautiful than beads of sunlight dancing on the gently crashing surf. Seagull sirens of sound float in and out of view rising upwards on the thermals of sound that swirl upward into a sunbaked blue sky. Imagine 'Big City' by the Spacemen 3 removed from its urban environment, slowed, stretched and relocated to a beautiful place of coastal countryside. It is a stunningly beautiful moment of teleportation on a consistently beguiling and absorbing record.

"PN_17" glides into view following the sound of a train passing before unfurling itself on the other side of the tracks to reveal a hushed afternoon meadow of sound punctuated with some lovely gently swaying tones and bird calls. Sounds swell, feedback builds and fades, pictures sharpen then dissolve.

The use of field recordings that capture distant voices inside a revolving 5 note synth wash on the title track manages the very difficult trick of being both very simple whilst entrancing the listener into a kaleidoscopic reverie of flashbacks entirely sourced from one's own memory banks - hauntology par excellence.It's final cluster of hazy, unintelligible voices close out the first side of the record in a strong and strangely cinematic fashion.

Side two opens with "L'ancienne Grange", a tightly wound melody with counterpoint set in a botanical garden of mysterious and exotic sounds - it has an almost hypnotic quality. "Lanverec" is a slow burn descending drone piece replete with bird calls and a somewhat sinister vibe to it that gives rise to thoughts of cloudy hillsides, overamped electricity pylons and shaded country lanes. It leaves the listener uncertain of the intended destination and definitely strikes hard as the most unsettling point on the record. "Centre Vile" follows, bringing some momentary focus with its soberingly sharp church bell introduction ringing out a note of awakening. This call to prayer is followed by washes of synth, bowed cymbals (I think) and drones that once more envelop and surround the listener. It's a pretty mesmerising scene, heavy with blankets of ambient sound that breathe slowly and deeply through the speakers.

Le depart arrives all too quickly with the brief and appropriately titled 'Sortie', its combination of field recordings and light drones transporting the listener effectively to the point of departure. The ferry announcers call is heard and closes the circle but on this ocassion the voices are distant, mysterious and unclear giving way a denouement is almost indetectable. We arrive back at our present location, unsure of where we have been but our perceptions changed by the journey we have completed. Therein lies the power at the heart of 'Autres Directions'.

So once again Clay Pipe release a compelling work of imagination and guile, another wonderfully evocative piece of work from Jon Brooks that may be his best solo outing thus far. Needless to say as with all Clay Pipe releases this is beautifully packaged in what I am interepeting as a wonderful collision of vintage Blue Note and Highway Code graphic artwork courtesy of the endlessly talented label owner Frances Castle (on a lovely fog coloured vinyl too). Equally needless to say, this limited vinyl run of 500 will almost certainly sell out with days of (pre)release so look sharp and grab a copy while you can. Au revoir mes amis.

Vinyl pre-orders are available from the label, and digital will be available directly from Mr Brooks on the release date of May 5th. Put it in your diary!