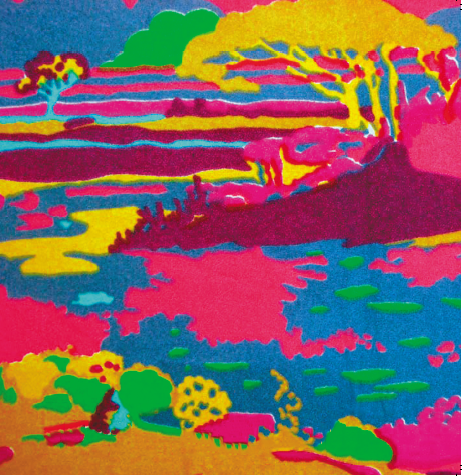 In a corner of the Alps there is a tear in the dimensions of time and space. Within its uniquely swirling vortex is a time lock that is always oscillating between 1967 and 1973. From that forbidden zone, the new Balduin record, “Bohemian Garden” has reached escape velocity, striking like a lightning bolt into the present. In achieving this feat, Balduin shares a musical creation that makes a bold and compelling case for being the baroque psych-pop-analogue synth event of the year.

For those not familiar with Balduin’s previous forays on Sunstone Records we are very much in the cosmic sandpit here surrounded by pretty ballerinas while wind chimes hang down from the stained glass windows of the gingerbread house and though its hard we try not to stare at them. This new record sees his sonic palate expanded with tunes that deploy taste ripples of primitive synth – pushing the sonic envelope further into new territories that his previous outing on Sunstone, the delightful ‘All In A Dream’ .

The opening duo of the title track and “Leave to Seek The Light” are perfect confections of kaleidoscopically arranged psych-pop. Absolutely nailing a mood of dreaming introspection and tripped out wonder – this is highly developed craft at work here. It’s a really strong opening and I am pleased to report that it sets a benchmark for the rest of the record that it is able to match for the remaining 25 minutes of this brief but perfectly formed collection.

“Cap Frehel” pushes the envelope further, taking the listener into a meadow of early 1970’s pastoral scenery complete with primitive synth and chiming vibes. Its a real groovy ‘Dralon trip’ and provides a lovely counterpoint to the more established ‘Balduin’ vibe which occupies most of the album. That Balduin vibe being very much a strain of euphoric psych-pop that tweaks the classic approach of its forebears to create its own unique medicine show. Balduin knows his history but is his own guy and has his own twist on the genre that makes listening to him a joy.

The intimate vibe created on ‘Your Own’ with its subtle acoustic guitar shifts and spectral backing is a joy and sets up the strange acid drenched and haunted collision of bossa-waltz ‘Libelle’ perfectly. A very smart musical one-two that spins a web around the listener that I have no desire whatsoever to try and escape from.

“Madrigal” dives into yesterday with its flowered up toytown pop delights and gentle groove before spinning off into the clouds and making way for the deeply lysergic ‘ Song for the Moon’. This peach of a song is all chiming ‘She Said, She Said’ guitar lines and floaty vocals that threaten to go into orbit but opt instead for an earthbound kaleidoscopic patchwork of sounds before evaporating in front of your very ears. The skewed music hall moves (for the benefit) of ‘Mr Bat’ is a queasy seaside postcard from another day and another lifetime with its sinister offer of ‘dance with me and you’ll be mine’. Matters are brought to a suitably bewildering conclusion by the brief and baffling ‘Rondo Vampyros’. Or perhaps they have been brought back to the beginning? I certainly found myself hitting repeat to spend another half-hour in Balduin’s bohemian company.

So there you have it. Balduin. A man who sees the world through kaleidoscope eyes, whose pop sensibility is sharper than sherbet. A man whose quest to make the perfect pop-psych record has delivered this many jewelled wonder. Come play with him in the garden and leave your mind at home.

Vinyl is available directly from the glorious Sunstone Records and select purveyors of sonic delights. Digital and full stream can be found here: