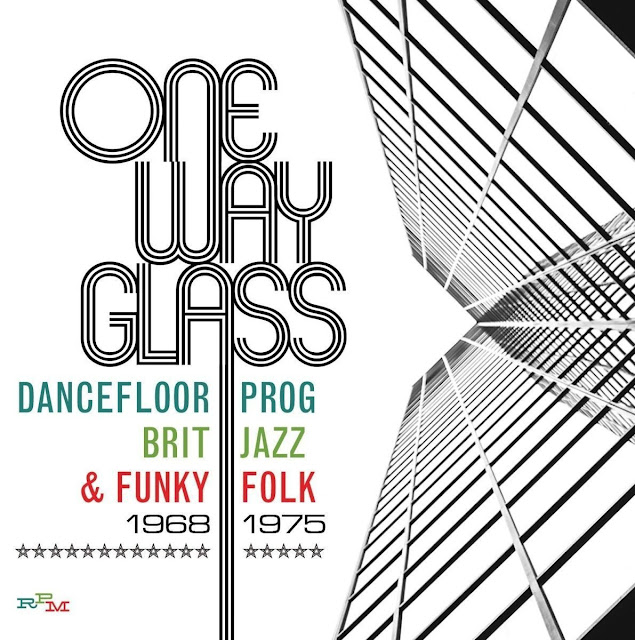 Another of RPM's attractively packaged (and attractively priced) clamshell box sets, "One Way Glass" offers three packed discs of underground material from the tail-end of the sixties through the mid seventies, focusing on how black American music of the time was making its influence felt on the mostly white English progressive scene.

The sixties UK scene had always embraced Motown and American R&B and soul, so it should come as no surprise that as the scene evolved, the increasingly accomplished musicicans (particularly in the prog-rock scene) would become enamoured of the adventurous jazz and funk sounds emanating from across the Atlantic and attempt to integrate them into their own increasingly complex compositions.

A number of the tunes featured here are pretty much straight funk tunes, and while that will appeal to funk collectors, I'm more interested in the tracks here that retain their prog / psych / folk credentials while remaining dancefloor friendly. There's plenty of this to be found here, with fans of late sixties / early seventies proto-prog who like a bit of flute and saxophone being particularly well served with outstanding contributions from Audience, Demon Fuzz and Skin Alley (whose Skin Valley Serenade retains a distinctly tudor feel) among others.

The compiler's have cast the net wide for this, with plenty of material from the Dawn, Vertigo and Transatlantic catalogues as well as lesser know labels. Additionally, many of these tracks are sourced from hard to find E.Ps and singles, making it an attractive prospect for album collectors who will likely have a few gaps in their collection filled by tracks like Demon Fuzz's "Message to Mankind".

Other notables include Graham Bond and Pete Brown's excellent Dr. Johnish "Macumbe", Pentangle's lovely, loose "I Saw An Angel" and two versions of Manfred Mann Chapter Three's classic "One Way Glass", by Trifle and the John Schroeder Orchestra (featuring vocals by a certain Chris Thompson who would later join Manfred Mann's Earth Band). Interesting the Manfred Mann original doesn't feature here, but I'm sure the majority of parties interested in this release will already be well familiar with it.

With three discs of material there's plenty to dig into, and if you're anything like me it'll fuel further digging for albums by many of these artists that I'd not heard before. Recommended.