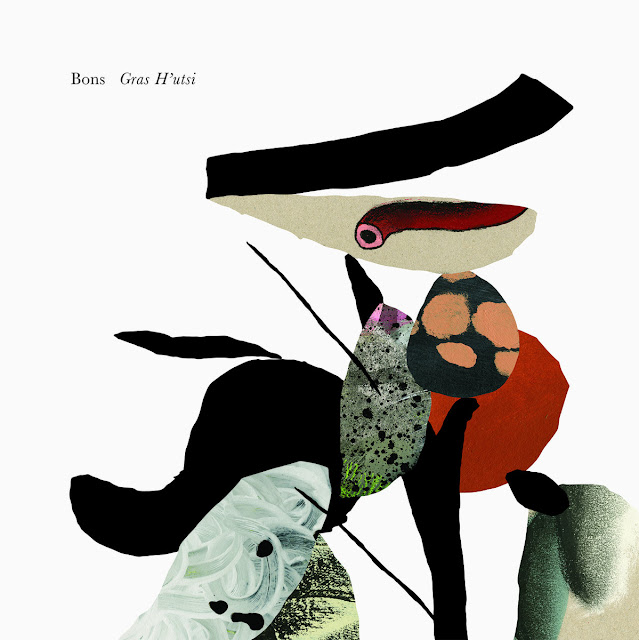 Spillage Fete is a singular label that occasionally puts out highly conceptualised and wonderfully enigmatic records from a slowly rotating cast of players. I imagine it being run by someone who is completely bonkers but in a really nice way. The sort of person who would engage you warmly on the merits of making your own wooden furniture or birdwatching and doesn't watch much telly. Someone distractedly engaged with an outside world that they don't fully subscribe to.

Bons is the latest musical venture to spring forth from the Spillage Fete label, noted for its interest in the less trodden of musical paths. "Gras H'utsi" does not disappoint on this measure or on many others as it's series of seemingly unrelated and tribal musical interruptions criss-cross your mind and pull you into a world that is simultaneously intricate and straightforward, instructive and confusing. The records title seems to indicate ruminations on European and African culture but are filtered and abstracted in such a way as to not offer anything as musically straightforward or instructive.

These are field recordings of half remembered dreams that the listener is asked to complete. It is a deeply personal listening experience that involves you in a way rarely found in these days of mass media manipulation.

So, how to describe in words this series of 16 short sonic interludes? Well here we go...

It is a supremely home-made record and I mean that in the most respectful way possible. The production values and instrumentation of choice mean that the record lives and breathes in your sitting room. It is optimally an indoors record that you allow to take a seat in your home - a conjuror's suitcase of 16 sounds with a human edge that all seek intimacy with the listener and gently coerce you into giving them your undivided attention. It's a great trick to pull off and Bons succeed perfectly in this objective.

Song titles as far as I can tell are not instructive and neither are the exquisite prints of paintings that adorn the accompanying booklet. This of course adds to the fun.

The exceptions to this analysis are the oddly affecting 'Double Latin' which to my warped mind is the most clearly conceptualised piece on the record. It successfully conveys the impression of slowly walking past the closed door of a school classroom during lesson time. And just as I congratulate myself for this amazing piece of realisation it quickly dissipates into a cloud of wow and flutter.

The other is 'Winnowing' which as you all know is the ancient Asian art of separating wheat from chaff by throwing it up into the air and allowing the lighter particles to blow away leaving the seeds to make the bread. A lovely metaphor for this beautifully sparse and deeply rural snapshot of warmth. It's a beautiful piece of music and my personal highlight of the record.

Elsewhere, we find the double bass and backwards tape treatment of 'Radical Shush' and the sweetly revolving 'Landschaft'. The mechanical looping of 'Syntax' floats overhead before taking a dreamy vocal turning - a bit like Grizzly Bear if they abandoned any sense of structure. "Dot Hub" is a weird collage that bewilders before dropping you off at a random bus stop miles from anywhere, though at least it's a stop with a shelter. Proceedings are brought to a suitably abrupt close with 'Low Hangs the Fruit' which announces itself before almost immediately making for the exit.

Colin Newman's (of Wire) "A to Z" is a fairly hopeful if sonically more dissonant reference point. You can also hear the work of Eno, Basinski and the hauntological essays of Belbury Poly, but really I'm grasping at the air - Bons are far too singular to stable comfortably with others.

What is for certain is that Bons have arrived to bring clarity to your overly cluttered life. Stop for a moment, make yourself a cup of tea and luxuriate in the endless possibilities of this delightfully strange musical experience. They are abstract expressionists of sound and masters at their chosen craft. You should find the time to join in with them for a while and remove yourself from the daily punishment of orthodoxy and routine.

Available on vinyl from selected independent retailers and directly here: