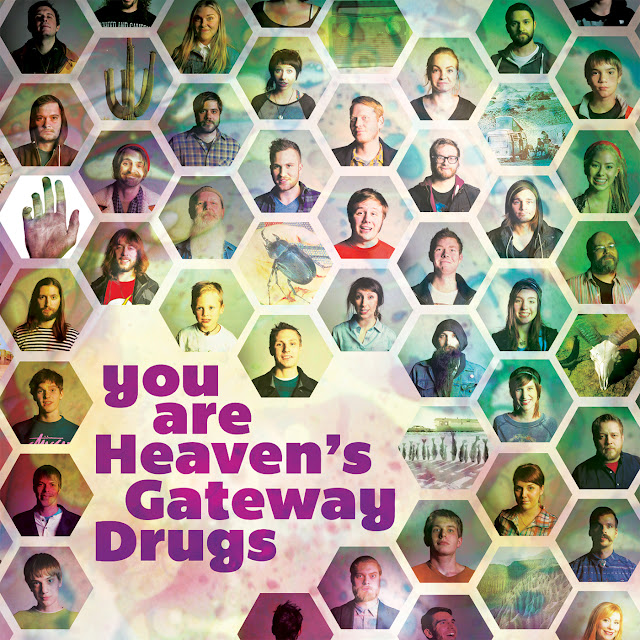 The debut E.P by Heaven's Gateway Drugs caused a quite a stir here at Active Listener HQ, resulting in an unhealthy level of singlemindedness that I'd only just managed to claw my way out of when "You Are Heaven's Gateway Drugs", their debut full length found it's way into my inbox. Oh well, time for a relapse.
Granted, all this new fangled psychedelia is still a bit of a niche genre that's a little confusing to the public at large and often viewed with suspicion and scepticism by certain music critics who accuse it's practitioners of flogging a dead horse, but Heaven's Gateway Drugs have a more wide reaching appeal than the majority of their contemporaries.
There are a number of factors you can point to for this. They write memorable songs with big choruses, have a particularly diverse set of active influences (by which I mean influences that can be heard in their own music) and they're not afraid to amp up the production values without resorting to the radio sheen or formulaic songwriting machine fodder that this often goes hand and hand with.
Cleverly combining the trippy psychedelic organ textures of the likes of "Army Coat" with ear tugging choruses that (presumably) betray an apprenticeship listening to early nineties alternative rock, "You Are Heaven's Gateway Drugs" is the sort of album which is perfectly geared to be an evangelical tool for those wanting to spread the new psychedelic gospel. We've all got one of those friends who frustrate the bejesus out of us by insisting that an album like Live's "Throwing Copper" is THE last great album. Even that guy will love this. What about that other friend who wishes Perry Farrell had stuck it out in Jane's Addiction for another twenty years? Yep, they're gonna love it too. In fact it's pretty hard to imagine anyone taking exception to Heaven's Gateway Drugs. They've certainly got everything a psych fiend could wish for; stacks of reverb, sitars, drones, trippy keyboards, the lot, but these elements are always used in service of the song, and never for the sake of novelty.
It's not often that a band in a niche like psychedelia comes along with this much crossover potential, and it's very nice to see that Tame Impala aren't an isolated incident. Get this on the radio, and these guys could be huge. Start spreading the news.