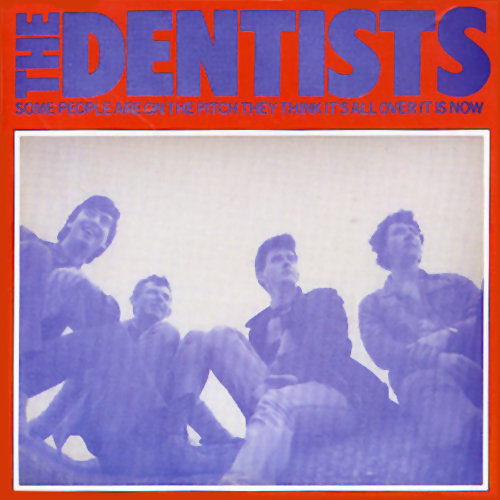 To my shame, I was unfamiliar with these Medway gods, until this promo found it's way into my lap and started caressing my ears in a lovingly shambolic fashion.
Sadly in 1985 when this was originally released I was too preoccupied with Dire Straits and Michael Jackson to dig far enough underground to hear this, but I suspect even my six year old self's dubious tastes would have found room to fit the Dentists into regular rotation on my faithful walkman.
It's an album ripe for reissue too, sounding now much as it must have in 1985 - like a holy relic captured outside of it's own time stream.
Produced by the Prisoner's Allan Crockford (now of the excellent Galileo 7), "Some people are on the pitch..."  has a gritty, no-nonsense production aesthetic that is functional and basic, but also full of lysergic surprises with some particularly nice backwards guitars standing out. If you think mid eighties psychedelia is all about the Paisley Underground, this will be a refreshing, more rugged alternative for you.
The songs themselves are very strong janglers which often recall early R.E.M, especially on the riffier numbers like "The Engineers Set" which has a touch of "Driver 8" about it (and perhaps inspired it, as I'm sure Peter Buck would have heard these guys.)
There's also more than a hint of the Byrds in the tight harmonies, and on a number of tracks particularly "One of our Psychedelic Breakers is Missing" the sort of memorable riffing that made the Misunderstood's English sides so attention grabbing, while "Tangerine" has moments of pure Gordons style mayhem as well as the sweetest chorus imaginable.
Unfortunately the powers that be at the BBC have decided that the title quote from Kenneth Wolstenholme's iconic 1966 World Cup commentary that originally opened the album has had to be removed for this reissue. Boo, hiss. I guess we're lucky Aunty didn't make Trouble in Mind retitle the album, but even in it's slightly rejigged form, this first vinyl reissue from Trouble in Mind is infectious, essential and a refreshing alternative to the era of coked-up stadium stars of Live Aid.