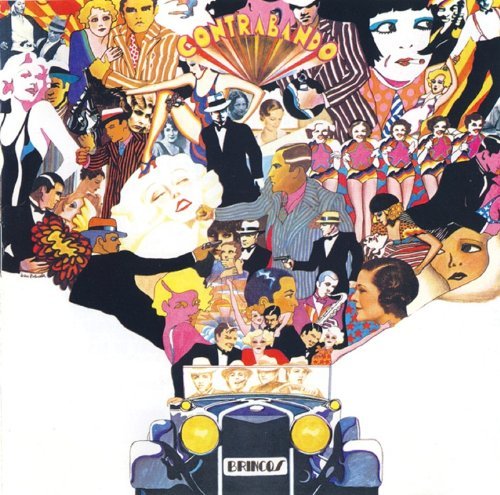 Los Brincos (translated as the Jumpers or Leapers, also often referred to as the Spanish Beatles) were facing tough times in 1967. With two key members jumping ship, most bands would call it a day, but this popular Spanish band instead went the other way and headed to London to record in the best studios with Larry Page ( The Kinks, The Troggs) overseeing.
"Contrabando" is a giant step forward from their earlier beat orientated material, with inventive production that perfectly balances the period flavor of London with the exoticism of their own Spanish background - Ivan Zulueta's explosive cover art fits it's contents perfectly.
There are flashes of popular acts of the day - Kinksian harpsichord work, tight Beatlesque harmonies, and on "The Train", a very familiar guitar and bass riff which this reissue's liner notes charitably refer to as having a "resemblance" to "Substitute". This one small act of plagiarism aside however, "Contrabando" is brimming with originality and top tunes, more often than not sung in their native tongue.
"Lola", which according to the liner notes has become one of the most well known pieces of Spanish popular music, is certainly a good leadoff track, with a memorable melody and complex horn charts, and there's better to come.
"Un Mundo Diferente" is a moody, protopsychedelic ballad with affecting harmonies and some lovely harpsichord, "El Pasaporte" is a surging rocker with a great mersey guitar riff and "Big Temptation" has a huge freakbeat sound with moments of pure U.K psych-pop.
To cement it's "embarrassment of riches" status fully, El Records have added a whole slew of tracks from contemporary singles that are easily the match of the "Contrabando" material, making this a 26 track monster of swinging pop psych that I'd recommended not only to aficionados of world psychedelia, but also anyone with a love for U.K pop-psych and freakbeat.

Out now on El Records - buy it here.