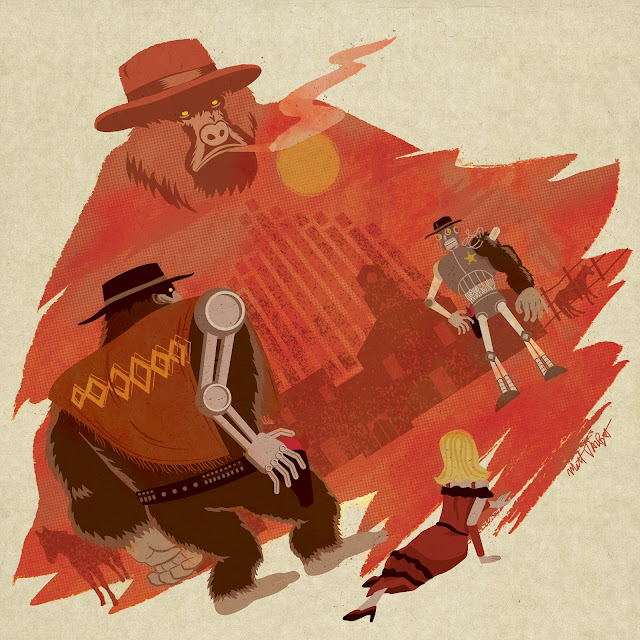 Attention grabbing covers are a bit of a double edged sword. On the one hand, they ensure that fickle folks like myself, who like shiny things are more inclined to have a curious listen. On the other hand, they create a certain amount of expectation as to the quality and content of what's inside. 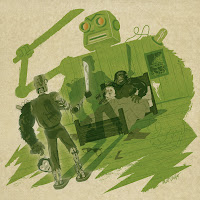 It's impressive then that these three esoteric and wonderfully evocative E.P sleeves from Matt Talbot manage to so successfully capture the essence of the music within.
U.K outfit robotmonkeyarm make very colorful music indeed, influenced chiefly it would seem by Italian cinema of the sixties and seventies - particularly the soundtrack work of Ennio Morricone.
While they're not alone in being inspired by the maestro, they do have a unique approach to how they integrate these distinctively period-referencing influences into a more contemporary setting - they describe themselves as prog-metal, but that somewhat limited tag does them a  major disservice in this writer's opinion - tips of icebergs and so forth.
"Part One...Robot Senza Nomme" is ostensibly a western, but also finds room for the frenetic surfbeat of "L'Automo" amidst twangy guitars and windswept, wordless vocals. 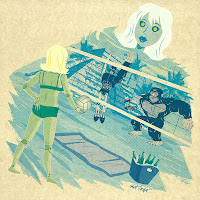 Things get even more diverse on the following two E.Ps which highlight among other things the crystaline Goblinesque "L'epilogo", the funky "Cinema Vomitif", while "Deliria (the final girl)" could quite easily pass for one of Mike Patton's more cinematic projects with it's woozy "Rosemary's baby" style melody.
It's rare to find such extreme levels of genre cross-pollination handled so smoothly - Mr Bungle, eat your heart out.
So why three E.Ps rather than an album? Simple - they're three distinct entities. Although admittedly they do slot together well and are obviously the work of the same fevered brain(s), they have their own internal logic and thematic code that make this episodic format ideal - and I'm not complaining about the opportunity to savour three pieces of Matt Talbot's art either.

Investigate here or click the widget below to hear a sample track or be taken to robotmonkeyarm's Bandcamp page.