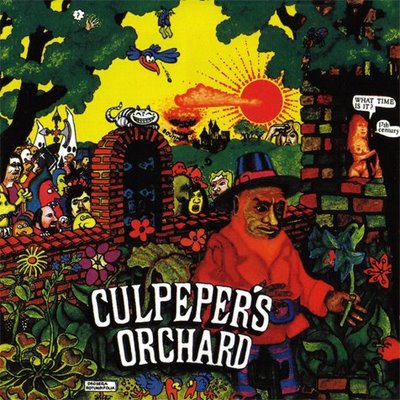 I was finally introduced to the delights of this Danish band's 1971 debut, via a vinyl reissue of dubious legality but excellent sound quality from the Tapestry label (does anyone out there know whether Tapestry's reissues are licensed?).
While a solid reputation among collectors is not necessarily a guarantee of quality, I can happily report that this is one major label rarity (originally released in Denmark on Polydor) that deserves all the raves it receives - and then some.
After an incongruous country folk intro with the short "Banjocul" the real Culpeper's Orchard show their true colors with "Mountain Music Part 1" a fabulous heavy rock number with progressive elements and a moody arpeggiated outro section that's very much ahead of it's time, sounding a lot like the atmospheric sections from "Strange World" or "Remember Tomorrow" from Iron Maiden's debut near the end of the decade.
What follows is a remarkably consistent and varied heavy rock album, brimming with confidence and memorable guitar work. There's Guess Who style rockers that transform themselves effortlessly into flute-heavy blues jams ("Ode to Resistance"), strong CSN style massed harmonies ("Teaparty for an Orchard", "Blue Day's Morning"), Canterbury tinged prog epics ("Your Song & Mine"), and downtempo psychedelic slowburners with a distinct U.K flavor ("Gideon's Trap").
Combining the exuberance of a debut with the seasoned confidence of a band well into it's career, "Culpeper's Orchard" is a winner on every level, and an important piece of the European psychedelic puzzle.
Not to put too fine a point on it, this is a seminal album that should be on your must hear list if you have any interest in late sixties / early seventies culture. Which I imagine is pretty much everyone who reads this blog.
Get on it then.