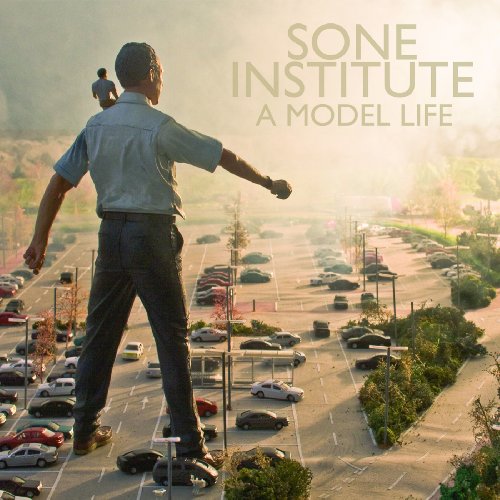 "A Model Life" is a shining monorail holo-cruise through quiet island villages, the (American) wild west, seventies spy thrillers and ultimately... Outer Space.
Roman Bezdyk accomplishes this by weaving a deft and dense tapestry of hip-hop, easy-listening and psychedelia that leaves the listener guessing what is real and what is sampled; an uncanny listening experience that you have to succumb to. Just kick back in your lush, plush recliner and gaze out the window, as wild & unfamiliar scenarios flit across your brain pan.
'Witchcraft & Pornography' and 'Fear And Happiness' serve as the launching pad, bookending the album - the point of departure. Hendrix riffs and a Dirty South beat reminding us, "Fear not. It's only a ride." Once you settle into this ride, The Sone Institute takes you on a breakneck journey through nearly every genre imaginable, while sturdy hip-hop beats tie the animatronic proceedings together, rooting it firmly in the present. This pancultural polygenre is a tricky business to pull off successfully. If you screw one of them up, you fail at them all (remember acid jazz?) Thankfully, The Sone Institute's beats are tight as stretched leather and Bezdyk either
a. knows how to  play a billion and one instruments
or
b. is one of the greatest living samplers.
Either way, the closer you look the more A Model Life draws you into its uncanny geography. Another reviewer drew issue with this record, accusing The Sone Institute of 'merely' making library or incidental music.
I have a problem with this assessment, for two reasons:
1. It supposes that there is something wrong with library music, as if it can't be listened to in terms of melody, dynamics, composition, and other aspects that have been around as long as songs have been written.
2. It doesn't really sound like library music, anyway.
True, "A Model Life" can slip into the backgrounds, around the second third of the album, but it sounds more like exotica than library music. It conjures images of tikis and moldy LPs rather than public access commercials and training films. I rather enjoy The Sone Institute recreating worldbeat easy-listening sounds and their fresh way of approaching something which might sound dated or foreign otherwise. Listening to "A Model Life" has left me yearning for Martin Denny, Astrud Gilberto and Henry Mancini spy soundtracks. Roman Bezdyk has created something special with "A Model Life", an artifact that is both classic and entirely timely.
It sounds like 2013, and also 1963.