Look To The North - You're A Séance Old North 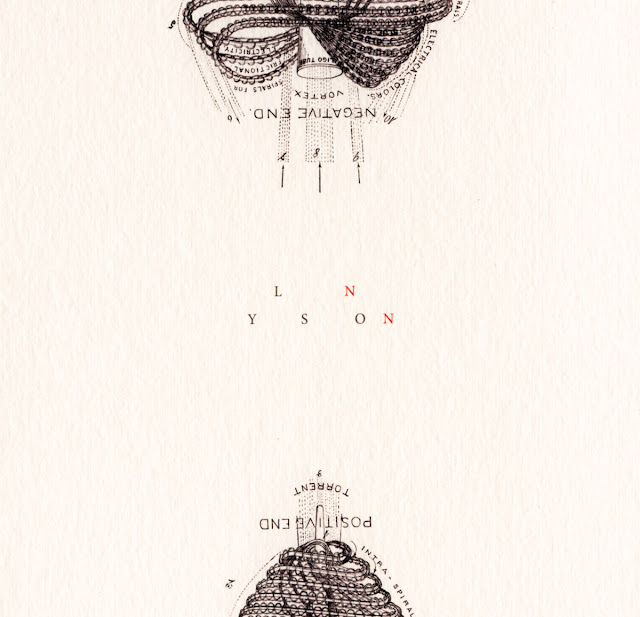 Look To The North, a long distance collaboration between Ireland's David Colohan (United Bible Studies, Raising Holy Sparks and Agitated Radio Pilot) and America's Zachery Corsa (Lost Trail), have previously impressed with their debut '5000 Blackbirds Fall Out Of The Sky', a beautifully detailed slice of psych folk ambiance. It is a significant degree of expectation then that greets 'You're A Séance Old North', which is repaid handsomely and repeatedly throughout what is a unique and truly special recording. This is an album that lives in the hinterland, the twilit liminal space between seasons and seems purpose made for the chill autumn sunsets and approaching winter darkness.

Essentially an album of two instrumental extended pieces, albeit with many subtle changes and junctures ebbing and flowing throughout, this is a deeply immersive album in which the listener can crawl into and inhabit for the space of its duration. And you will want to do so time and again; the opening track, the excellently titled 'Where You Vanished Off The Edges Of A Cul-de-sac, Like Falling Off A Map' feels like entering a hazy, blurred and slightly off kilter dream or memory. Choral drones drift and retreat amongst bird and cricket song, but this is no gentle or new age ambience, instead there is a pleasingly unsettling ‘Twin Peaks’ air to this landscape. Colohan's autoharp picks out a fragile, ghostlike melody as the drones recede into the sound of radio static and muffled, long forgotten voices from the past. Corsa’s piano then haunts the emptiness that remains until an angelic mellotron choir descends; this is a haunted house of an album, a subconscious filled with the sounds, tears and hopes of yesteryear, both sepia tinted and dust covered. Electronic pulses conjure a solar, electric wind upon which a solitary harmonium wheezes and weeps, a chance meeting of several possible timelines at once. Washes of old radio chatter and utterly lovely chiming drones and peals roll in like waves, not unlike a heavily slowed down Cocteau Twins, the music's quiet power utterly beguiling and bewitching.

An elderly man's voice enters and reflects biblically on the fate of the world before the second piece 'Harriet Was Here, Less So Now' begins with a whirring, looping vocal sample to be joined by piano, guitar and a growing torrent of static and feedback. Where the opening track was spacious and sacred, its sister piece is disturbed and storm wracked. All storms must break however and this soon quietens into delicately picked autoharp and further sampled religious dialogue which adds an unnerving post apocalyptic tinge. Wind and rainfall rise to the foreground, the sound of the woods and the creatures within reverberating, merging with spectral conversations and melodies that seem plucked from beyond the veil, as if the curtain between the worlds is thinner here, where this album inhabits. Footsteps on leaves are closely followed by an unearthly breathing, of something not human until the welcome static returns and the autoharp notes cascade like tears over disembodied recollections from voices from the distant past. Again, eerie and unnerving sounds weave through the woodlands, a wraithlike choir not far behind as dark, impenetrable waves of guitar and echoed howls grow to obscure all else. A lone voice emerges through the shortwave crackle to exclaim 'It's still here' and the transmission suddenly ends. Both unnerving and curiously beautiful this is an album that is also an immersive experience; the silence after it has finished feels loud and tangible, as if emerging from a hypnogogic or a wakened dream.

Both Colohan and Corsa are experienced and renowned composers and this album is rich with nuance, detail and gentle, emotive resonance. For those who admire the work of Richard Skelton, Richard Moult and Michael Begg's Human Greed, this is an essential acquisition. Special mention must go the exquisite packaging from AOsmosis Records; a limited edition stitched 16 page booklet replete with transparent and paper prints along with the accompanying poetry of Zach Corsa. Handmade and a genuine thing of beauty, Aosmosis have done themselves proud and a serious enquiry into their other releases is recommended.