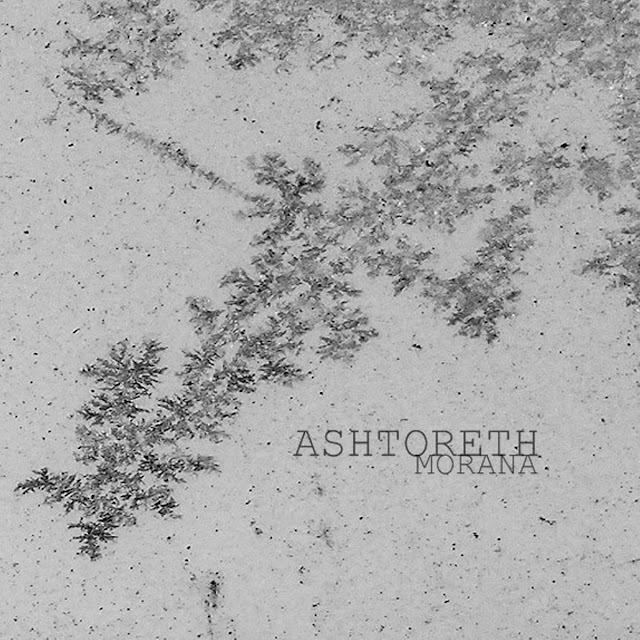 Belgium's mighty Ashtoreth have been releasing highly impressive and affectingly atmospheric albums over the last few years to an increasingly dedicated audience, culminating in the beautiful and expansive collaboration with TCH, 'Angels Will Guide The Way To Our Harbour', a post rock symphony of echoed guitar drones and vast shifting swathes of desolate sound. However they have arguably produced their finest work here with the recently released 'Morana', an ambitious and hugely accomplished recording that touches on key contemporaries such as Sunn O))), Blood Of The Black Owl and The Elemental Chrysalis whilst also traversing the dark psychedelic paths taken by luminaries such as Popol Vuh, Tangerine Dream and 'Saucerful of Secrets' era Pink Floyd. Recorded (with the exception of one track) in a single sitting, this is an organic and improvisational work that breathes, twists and shifts like grey smoke, drifting with purpose exactly where it needs to go. Inspired by a Slavic goddess and seasonal rites based on the idea of death and rebirth of nature, this is an album that combines the sacred with something more deeply of the earth, something ancient and sleeping.

Opener 'Hyberna' gradually and glacially shifts into view, a melancholy drone with bursts of guitar that fold in on itself and repeat, building and endlessly layering. The piece grows, shifting in tension and power, a tolling guitar note chiming like a bell calling time at the end of the world as the song becomes ever more expansive. The crackle and burn of guitar feedback drifts steadily like stormclouds beneath, indeed there is something here akin to the feeling before an electrical storm, the hum and suspense in the air. 'Kāla Nāg' continues this haunted journey but with the addition of wordless female vocals, cosmiche strings and an echoed guitar motif that bleeds ominously over the distant chatter and washes of sound that ebb and flow throughout. That Ashtoreth is the work of one man Peter Verwimp, is something quite impressive indeed. It is equally mindblowing how he has essentially constructed this in a singular take; complex layers develop and overlap, meditative pauses allow for controlled feedback to tear at the heartstrings and there is a genuine sense of careful composition, yet this is essentially one man's intuition and vision. Next, the enormous 'Tymor', a staggering 26 minutes long, creeps stealthily into being on a melancholic and repeated guitar line, whilst behind deep, resonating drones and ebow construct a cobweb of haunted sounds as an unsettling bass rumble indicates something more sinister growing in form. Backwards effects bring a sudden and dramatic pause until tentative strings drifting like thick fog emerge and a more meditative and sacred mood returns; you can almost feel the cold tendrils of mist as the sound resounds, a chill and cold air pervading. By gently adding further cathedral-like textures Verwimp achieves a religious sanctity that is both affecting and emotive, a true symphony of sorrow. The album finale 'Wani Yetu' begins with a distorted vocal chant before being joined by a deeper, baritone voice to create something both ancient and eternal, a spectral choral master-work. Unsettling and chilling yet also deeply human, this is the sound of a thousand ghosts calling out to us, reminding us that we soon will be part of this eternal choir.

A remarkable achievement, 'Morana' begs to be heard widely; it is both post-rock/psychedelic as well as an experimental piece and yet is also arguably modern classical; a movement in four segments that is genuinely transportive for the listener. Many such instrumental works rely on certain common and recognisable motifs, clichés and dynamics to keep the listeners attention; not so this album which connects and enraptures in its own unique and individual manner. Seek out Morana, this is an important work and one which needs to be experienced; immerse yourself in the drone.