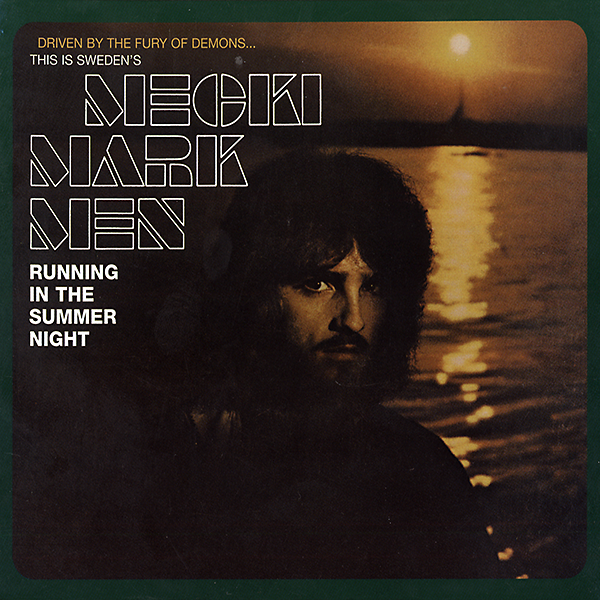 Driven By The Fury Of Demons... the cover states, and there's certainly something about the way that Mecki Bodemark is looming out of the shadows on the cover that suggests something diabolical may be afoot.
The Mecki Mark Men released their self titled debut album in their native Sweden in 1967 which led to support for local shows by Frank Zappa and the Mothers of Invention and the Jimi Hendrix Experience.
Keyboardist / vocalist Bodemark built on this promising start by putting together an entirely new lineup for the followup, and first to receive an American release, Running In The Summer Night.
Hendrix was apparently a huge fan, which I find amusing as Hendrix apparently hated his own vocals, and Bodemark's voice is a dead ringer for Hendrix's at times, right down to the phrasing. Hendrix seemed to think his vocal abilities were rather limited, where I've always found them to be effortlessly soulful, so Bodemark's ability to tap into this is very welcome. 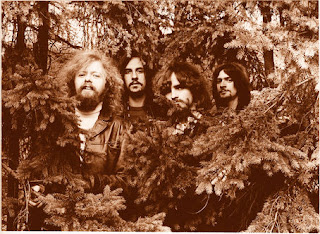 Also welcome is Bodemark's wild keyboard work, which incorporated tricks similar to those Hendrix himself used on the guitar. New guitarist Kenny H.Karlssonn also impresses with his dexterous and often innovative guitar work.
Another of the band's greatest strengths is their already well cemented sense of identity - many albums of this era from unproven bands suffer from being overly schizophrenic,  trying a number of different styles, record labels putting pressure on for hits and a general  feeling that the artists are unsure of where they're heading, or being prodded in more commercial directions that they're not comfortable with. None of these problems are apparent here however, MMM were obviously very sure of themselves and Hendrix comparisons aside, these guys don't really sound a whole lot like anyone else I've heard.
Which makes them hard to classify. Like the Experience, they're basically a rock band informed by a whole lot of other genres. There's plenty of blues and psychedelia in there, a dash of spacey, proto-progressive rock on some of the quieter moments, with traces of r&b, folk, jazz and beat also appearing sporadically. Where a lot of their contemporaries tended to struggle to mix these diverse strands, resulting in albums with a few psych tracks, a few blues tracks, the token country number etc, MMM wrote material which managed to evoke their different influences, without betraying their own sound.
Every track is worthy of mention, but to focus on a couple;  Sweet Swede Girls rides a sweaty proto-stoner rock riff and features some fine harmonised guitar and vocal parts. Future On The Road is a superior stab at the sort of hard blues Graham Bond was churning out before he decided he was a witch. The Life Cycle is a Floydian song cycle with moody keyboards and waves of lighter guitars that wouldn't sound out of place on Relics.
It's the sort of filler free album where any track could be pulled and isolated as a key track. Certainly an album that should have a better following than it has, investigate immediately.

Buy Running in the Summer Night On CD Here

You can sample several tracks below: