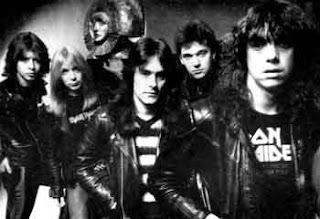 Having published a few of these by guests now, I thought it was about time I weighed in with my own list of Desert Island Discs.
I didn't realize when I set this task for others quite what I was expecting of them. Culling down a lifetime's worth of listening into one bitesize package is tremendously difficult, and truth be told if I was to be asked to do the same thing in a month's time my list may well have changed dramatically.
There are artists ( Bob Dylan, Steve Earle, Neil Young, The Kinks, The Fleet Foxes, David Bowie to name a few ), who really should be on here but I'm frankly unable to choose only one album to adequately represent them. With the following ten albums however, I think I'd be prepared for any eventuality.

Iron Maiden - Killers
When this impressionable six year old Michael Jackson fan first heard Iron Maiden's Phantom of the Opera on a Lucozade commercial in the mid eighties, pop music was fickly swept aside in favor of all things guitar based. I shudder to think what this blog would be like without this timely intervention. While I've mellowed somewhat since, I've still got plenty of time for Iron Maiden.
While the Bruce Dickinson / Nicko McBrain line-up seems to be most people's Maiden of choice, I prefer the rougher edges of the Paul Di'anno / Clive Burr years.  Liberally mixing the precision of Thin Lizzy's dual guitar attack, with the speed and aggression of punk rock and Motorhead, Maiden more or less set the template for the future of heavy metal with these albums. The debut is great, but Killers trumps it with tighter arrangements, a brighter mix and more consistent material. Di'anno's vocals are at their most confident here too, and Dave Murray's wonderfully twiddly guitar solos are at their very best.

The Beatles - Abbey Road
I can't think of any other band who recorded as much as the Beatles in such a short space of time and can  claim their last album as being one of their best. It's a miraculous album really. The disharmony among the group at this point should have made it impossible for them to create such a cohesive record. While Revolver and Sgt. Peppers are probably better albums technically, Abbey Road to me is their most enjoyable from start to finish. it's got everything that made them great too. Amazing harmonies ( Because ), guitar rock ( I Want You's exceptional, hypnotic riff that seems to last forever, but still leaves you wanting more ), peerless ballads ( Something, which has one of the most tasteful guitar solos ever recorded ) and complex mini suites ( all of Side Two basically ). And I haven't even mentioned the greatness that is You Never Give Me Your Money.  Masterful.

Love - Forever Changes
Forever Changes is an album that's almost impossible to explain. Perhaps that's why it's always in critics top ten lists, but still remains largely unknown to the general public. Another reason perhaps is that it's such an amazingly good album that it completely dwarves the rest of Arthur Lee's actually rather impressive output, making someone who had a pretty consistent and often adventurous catalogue look like a bit of a one hit wonder. Though generally considered psychedelic, musically it's much less about studio trickery and a whole lot more about clever and groundbreaking arrangements. Mostly played on acoustic instruments, with some surprisingly complex string and brass arrangements, the thing that really stands up here is the astonishingly good songs. Lee was a pioneering songwriter and one of the first to recognize that things weren't all good during the Summer of Love. Paranoia-fueled anthems like the Red Telephone and A House Is Not A Motel set the standard but there's also plenty of room for the likes of the much covered mariachi tinged Alone Again Or and Bryan McLean's quite lovely Old Man. I've quite possibly played this album a thousand times, and it retains it's freshness and ability to surprise every one of those times.

Ennio Morricone - Investigation of a Citizen above Suspicion
I'm a total soundtrack fiend so I'm very pleased that there seems to be a growing awareness that many soundtracks have a lot more to offer on their own merits rather than just being tools to signpost moods in films . Selecting a single soundtrack to accompany my desert island time was one of the hardest choices to be made here. It could have so easily been Goblin's Profondo Rosso, Les Baxter's Dunwich Horror, James Bernard's Dracula Prince of Darkness, Air's Virgin Suicides, Lalo Schifrin's The Fox, Halloween, Rosemary's Baby or any number of others, but I've settled for this excellent Morricone score, which I was introduced to via Fantomas' wonderful Director's Cut album. It's more melodic and straightforward than Morricone's other contemperous thriller scores, but a lot more adventurous than his more well known spaghetti westerns - a happy medium between the two, without really sounding like anything else in his catalogue ( anything that I've heard anyway, I'd be very pleased to hear if there's anything else like this out there ). Quirky, suspenseful, playful and very cleverly arranged, with themes you'll be humming for days.

Maggie Bjorklund - Coming Home
A well played steel guitar is pretty much unbeatable in my book, and no one plays it better than Sweden's Maggie Bjorklund. Having done session work for years, she finally released an album of her own in 2010, and it's one of the most startling things I've ever heard. It's fairly equally divided between vocal tracks ( with help from Mark Lanegan and Jon Auer ) and evocative, windswept instrumentals.
Calexico's Joey Burns and John Convertino play bass and drums, giving this a beautifully desolate sound partway between the more atmospheric moments on Calexico's Black Light and oddly, Earth's The Bees Made Honey In The Lion's Head. This is one you have to hear on vinyl to get the full effect of - without a doubt one of the warmest vinyl mastering jobs I've ever heard.

Mellow Candle - Swaddling Songs
Swaddling Songs hands down beats anything by Fairport Convention, The Trees, Pentangle and all the other 60's/70's UK folk rockers in this writers humble opinion. There were a lot of obscure bands peddling this sort of stuff at the time, but none with the imagination and sense of self that Mellow Candle display here on sadly, their only album.With two powerful female vocalists who can harmonize like angels, and a band that rocks and swings far more than you'd expect, this is a total gem. Better singers than Sandy Denny? Obviously no. Better guitar work than Richard Thompson? Again no. But put them all together and they're definitely, as cliched as it sounds, more than the sum of their parts. They play like they're inside each other's heads and there are more classic songs on here than most bands manage in a whole career. This is one rarity that is well and truly worth the effort to find.

Van Morrison - Common One
A misunderstood and totally underappreciated masterpiece here from Van, that deserves to be spoken about in the same hushed tones as Coltrane's A Love Supreme with which it shares a certain sense of ambition. Satisfied is a punchy gem which should have been a hit, but it's the longer cuts that are where Van and an absolutely immaculate band shine. When Heart Is Open cribs liberally from Miles Davis' In a Silent Way without overstepping while Summertime in England is the ultimate Van track, a fifteen minute epic that manages to sound both completely spontaneous and painstakingly structured at the same time. Amazing horns, and Van's most impassioned vocal ever with inspired scatting, and inspired ( some say pretentious ) stream of consciousness lyrics.

The Electric Prunes - Mass In F Minor
David Axelrod's work from the sixties was truly innovative and at it's best on the two LPs he produced for Reprise under the name of the Electric Prunes ( when the original Prunes broke up, the label were left with the rights for the name ).
Basically a catholic mass accompanied by a full psychedelic band plus orchestra, this is an acquired taste perhaps, but one that suits me to a tee. The super funky drums and layers of searing acid guitars courtesy of the Collector's Dave Hassinger make surprisingly comfortable bedfellows with the more traditional elements - moody choral vocals and church organ. Kyrie Eleison found it's way onto the Easy Rider soundtrack, but the concept of mixing psychedelia with religion was too esoteric for the masses, and as a result Mass In F Minor is generally viewed as a minor curio of the times - but the tide is turning thanks to an ever-growing number of discerning crate-diggers. As I've neglected to pack any Nick Drake for my enforced, I guess this will have to be my go-to Sunday morning disc

Midlake - The Trials of Van Occupanther
One of Midlake's most admirable quality's is their ability to completely reinvent themselves with each album, making them as close as we've got to a beardy equivalent to trailblazing seventies Bowie. While their first album's quirky lo-fi didn't do much for me, they've released two absolute gems since. Fortunately Stephen from the Rowan Amber Mill chose The Courage of Others in his Desert Island list, saving me from having to make a difficult choice ( I'm planning on getting shipwrecked on the same island as him, so I can visit his cave to listen to Courage. )
Where Courage sounds like Pentangle scoring the Wicker Man soundtrack, it's predecessor The Trials of Van Occupanther is seemingly inspired more by the sunny canyon sounds of Neil Young and Fleetwood Mac, albeit shrouded in a melancholy that the Mac generally avoided. If there's a more perfect opening than Roscoe's choogling guitar riff, accompanied by those heavenly close harmonies, I'd request that you introduce us as soon as possible.

The Music of John Barry
I listened to a heck of a lot of Portishead during my teenage years, and was obsessive enough to hunt down the original sources for as many of their samples as I could. John Barry's theme from the I.P.C.R.E.S.S File ( contained here ) was the gold at the end of this particular rainbow. Up until this point my exposure to Barry was limited to the odd Bond theme, and an unhealthy childhood obsession with Disney's Black Hole, the soundtrack to which was almost as depressing as the ending of the film itself. Once I'd heard his good stuff though there was no stopping me. The early beat stuff had it's moments, but it was Barry's material from the sixties that really grabbed me. Of the many compilations out there, this is one of the easiest to pick up ( on vinyl anyway ), and fortuitously also the best in my eyes. The grandiose arrangements contained within would certainly make the reality of spearing fish and palm leaf toilet paper during my Island captivity appear a lot more glamorous than it really would be.
The Bond themes, Goldfinger especially are given the chance to show their otherwise unsuspected subtleties in these instrumental arrangements, while Seance on a Wet Afternoon is a masterclass in mood and suspense, only topped by the fabulously dramatic organ and choral rerecording of The Lion In Winter. Not to mention his two finest Bond pieces, Space March and On Her Majesty's Secret Service. All class this man.