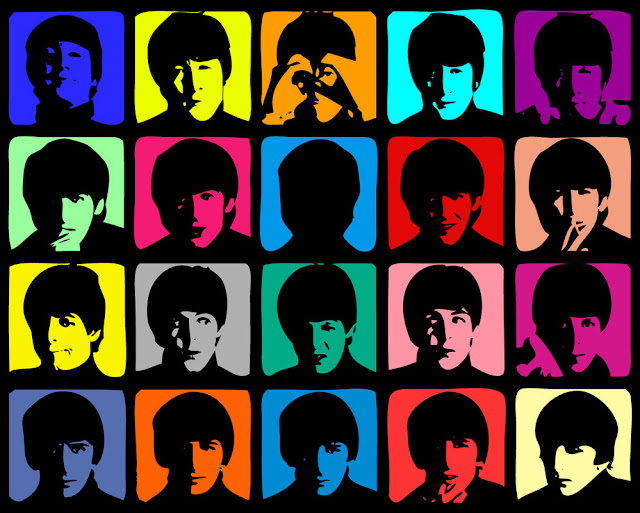 I always wondered why the folks that put out the Pepperisms compilation never released a follow up volume, so I set myself the task of putting one together. I've cast the net a bit wider than the original collection which featured material mostly from the 60s and all showing the influence of the Sgt Peppers album in particular. I've tried to sequence this to sound like a chronological alternate Beatles collection - so we start out with the early merseybeat sound, work our way through Revolver and Sgt Pepper style psychedelia into  heavier and more diverse White Album / Let It Be sounds.

1. Los Shakers - Break It All . Great Hard Days Night style rocker from Uruguay's favourite 60s beat group.
2. The 23rd Turnoff - Flowers are Flowering . Excellent Lennonish Revolver sounds from this 60s Liverpool outfit.
3. Gene Clark - Elevator Operator . Ticket To Ride meets  Paperback Writer on this track from the ex Byrd's first classic solo album.
4. Colours - Helping You Out . Pure McCartney harmony pop from this 60s U.S band.
5. The Spongetones - Eloquent Spokesman . Early Beatles sound plus backwards guitars. What's not to like?
6. Cotton Mather - Spin My Wheels . More backwards guitars here and a very Lennonish vocal from this great 90's indie band, highly indebted to the Beatles.
7. The Fraternal Order of the All - Tomorrow Drop Dead . excellent Tomorrow Never Knows tribute / pastiche.
8. Cheap Trick - Taxman Mr Thief . The Trick's Taxman sequel is heavier than most Beatles material until the vocal harmonies kick in.
9. The Auteurs - Unsolved Child Murder . An Eleanor Rigby for the 90's.
10. Dog Age - I Love You . Beatle loving swedes with a track that could have come from magical Mystery Tour.
11. Lazy Smoke - How Did You Die . Sgt Pepper sounding down to it's mock live intro and outro. And great too.
12. The Aerovons - Children . Recorded at Abbey Road while the Beatles were recording next door this is affectionately derivative.
13. Chris Bell - Better Save Yourself . Abbey Road / Let It Be era cathartic Lennon.
14. The Move - My Marge . McCartney-esque music hall for lovers of Maxwells Silver Hammer and When I'm 64. I know you're out there.
15. Green Pajamas - Scarlet Song . Kitchen sink beatleism - a bit of everything.
16. Lawrence Arabia - Look Like A Fool . Lovely Lennonesque piano number with an incredibly tasteful guitar solo that George would be proud of.
17. Emitt Rhodes - Mother Earth . Rhodes had the late 60's McCartney sound down better than McCartney did in the early 70's.
18. We All Together - Follow Me If You Can . Peruvian Beatles disciples.
19. Samuel F. Scott & The Bunnies on Ponies - Llewellyn . If Yellow Submarine was as psychedelic musically as it is lyrically it might sound a little like this.
20. Unkle Bob - She's Leaving Home . She's Leaving Home done I Want You ( She's So Heavy ) style? Yes please.

As always, if you hear anything you like please support the artists by buying their albums.

If there's a positive response I'll look at putting a third volume together so let me know if you've enjoyed this!