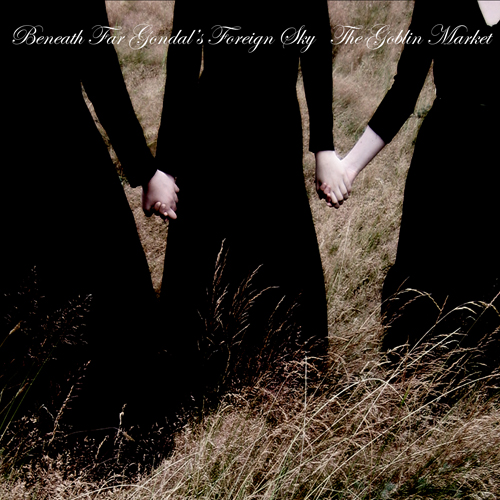 I've established with previous posts that the Green Pajamas are glorious, and are frankly required listening for anyone who claims to love guitar based pop/rock. The word genius may have been used.
I lack the necessary education to work out a way to scientifically prove this yet, but I'm convinced that it's is fact and not merely opinion.
Naturally the same goes for their equally under-appreciated side project the Goblin Market. Where the Green Pajamas act as a perfect distillation of Jeff Kelly's unerring pop smarts, the Goblin Market allows Kelly and Laura Weller the opportunity to approach things from a more subtle and cerebral vantage point. But Don't let me give you the impression that this is just Green Pajamas without the choruses. Their recently released third effort, Beneath Far Gondal's Foreign Sky is a thing of often exquisite beauty.
As with previous Goblin Market releases this has a unifying theme, the works of the Bronte sisters in this case. They've referenced them before, on their first album Ghostland from 2001, and the Green Pajama's 1999 album Seven Fathoms Down and Falling, but this is the first time they've fully immersed themselves in the subject. The expanded and varied instrumentation they utilize here allows all of the drama and melancholy of the source material the opportunity to shine.
Weller and Kelly's voices entwine on Tell Me Tell Me Smiling Child in a lovely fashion, against a backdrop of delicate piano with tasteful harp and string embellishments.
If This Be All is captivating, with a hypnotic instrumental coda of arpeggiated guitars and lush strings.
High Waving Heather, revisited from the Seven Fathoms Down album, should sound totally out of place with it's hooky chorus and burbling atmospheric electronic intro, but it's all credit to the band that their sense of unity here is so strong that this fits in seamlessly. Or perhaps having a background in listening to their records has made me more open to expecting the unexpected.
Either way this is an experience I would wholeheartedly recommend. Get going on this now and you'll be anticipating Death By Misadventure, the upcoming Green Pajamas album just as keenly as I am.

Listen Here.
You Can Buy Beneath Far Gondol's Foreign Sky On CD Here
Or you can buy directly from Green Monkey Records Here.