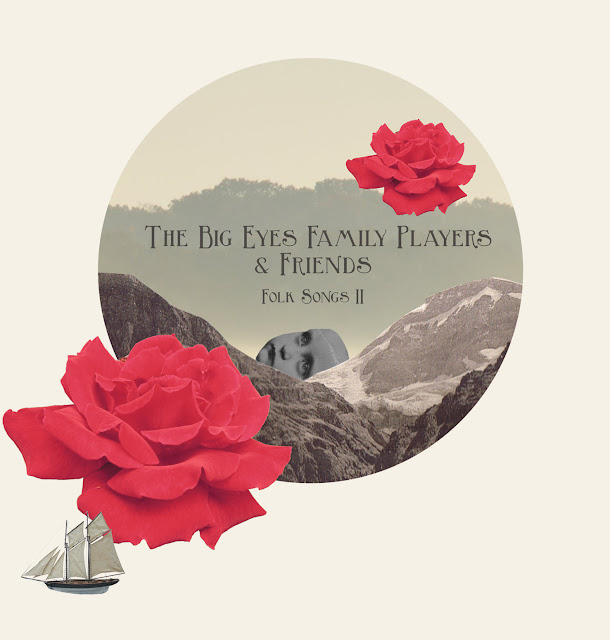 I like my folk to sound very ancient and a little wyrd and "Folk Songs 2" by the Big Eyes Family Players & Friends fits that bill perfectly.
The follow up to a collaborative album that the Players made in 2009 with James Yorkston, "Folk Songs 2" brings in a number of guest vocalists to people these very well selected traditionals.
The approach then is similar to Folk Police's delightful Woodbine & Ivy Band, although where the Woodbine & Ivy Band inject a healthy dose of folk rock, the Players instead pull on their diverse background in chamber music, folk and beyond. The resulting album sounds at once both totally ancient and strangely contemporary.
It's more Incredible String Band than Fairport Convention if you will.
The guests are a veritable who's who of the modern U.K folk scene, with Alasdair Roberts predictably stealing the show with "Maureen from Gippursland" and especially the hypnotic " The Coast of Spain".
James Yorkston isn't far behind with the moody 'Looly, Looly".
As good a job as the guest vocalists do though, its the backdrop provided by the band that holds everything together with such consumate skill, and offers surprises around every corner. There's a moment on 'The Clyde Water" where the organ first enters that is so startling, yet fits so perfectly that I was put in mind of how the Band's "Chest Fever" intro must have hit people on a first listen.
Elsewhere, psychedelic drones, varied and eccentric keyboards and tasteful strings help to bridge the generations, making this an album that should appeal to fans of Nic Jones and Joanna Newsom alike.
Quite lovely.