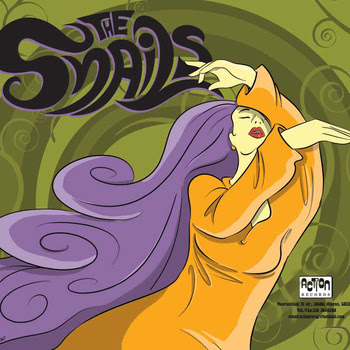 I've been told that Greece has a vibrant psychedelic garage scene, and if the debut full length by the Snails is anything to go by, there's plenty of untapped gold waiting to be discovered there.
The Snails follow the commandments laid down by the original psychedelic garage explorers of the sixties with such skill that at times you'd swear you were listening to an original artifact from the era, albeit one with a considerable amount more attitude than all but the most demented of the original wave.
I'll be honest - I usually prefer my psychedelia to be more along the psych pop or trippy side of things, but these guys do such a good job here that they've totally won me over despite these prejudices.
Heavily tremeloed rhythm guitars coupled with scuzzy leads, plenty of harmonica and a surprisingly nimble bass player set the template here, but there's plenty of variety to be had. A cover of the Third Bardo's "Five Years Ahead of my Time" shows where their allegiances lay early on, but there's also primitive punk ("Universal Soldier" sounds like the Dead Kennedys with added harmonica), surf / spy instrumentals ("Surfazat") and on "Haifa Nights" an eastern tinged piece of garage psych with plenty of atmosphere, and rather unusually, a bunch of eastern scales played on lead harmonica, which works better in practice than it does on paper.
Equal parts the Monks and the Cramps with a little Yardbirds thrown in, this is music that's very hard not to play spot the influences with, but very easy to enjoy immensely.

Buy the CD here, or the digital download version through the bandcamp link below.