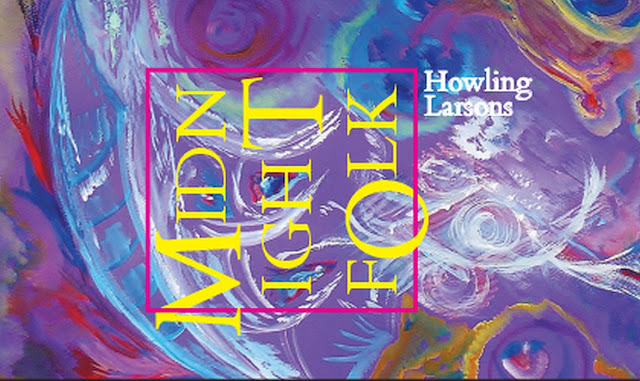 Howling Larsons, Alan Trench (Orchis, Temple Music, Twelve Thousand Days, Cunnan) and Rebecca Loftiss (The Gray Field Recordings), released their hypnotic and highly recommended début ‘Fool of Sound And Furry’ on the Reverb Worship label in 2013 to significant acclaim. Describing their sound perfectly as ‘nouveau occult psychedelia’, Howling Larsons ably merge and collage exquisite acid folk, dark psychedelia and experimental ambience, with both Trench and Loftiss having a close and masterful acquaintance with these genres in their other bands and guises (and if you haven’t come across the incredible and atmospheric Gray Field Recordings or the intricate psych folk of Orchis before do delve in without hesitation). The Larson’s stunning new release ‘Midnight Folk’, available previously as a CD issue distributed via the band and label Reverb Worship and containing a unique art print, is now out on cassette and digital release from Belgium’s Wool-E tapes and provides a perfect opportunity for both newcomers and the initiated to descend into the beautiful and mysterious shadows that are created within the Howling Larson’s singular universe.

'Ragged Ritual' opens the album in an alluring haze of organ, the buzz of treated voices and Loftiss's poetic incantations. Finger cymbals punctuate the growing clamour and intensity as the vocals become more ever more beautiful, choral and drenched in reverb. Effectively setting the mood of this unusual but transfixing recording this first track illustrates perfectly Howling Larsons' skill and ease with mixing the experimental with the melodic and memorable. 'The Butcher Boy' is a drifting slice of psych folk treasure, both Larsons harmonising with each other on vocals over a haunted and delicately fingerpicked acoustic lament. Next, 'Sound Of Light' combines tense and sombre guitar with cello, recorder and spectral vocals that recall some of the finest songs of acid folk masters Midwinter and Stone Angel (and indeed Orchis themselves); skeletal and wind torn this is folk music at its most spooked and bewitching. The track fades into the wail of solar storms, a perfectly atmospheric and fitting finale. 'Telescope' is a strident spoken word and sung piece by Loftiss, cello and electric guitar weaving and winding its way ever forwards into the enclosing darkness. Mention must be made of the intricate and at times baroque arrangements that add a sophisticated and timeless beauty to the album; indeed both Trench and Loftiss perform everything on this album themselves. 'Goat Song' is an eastern raga, wild recorder trills and the sound of esoteric stringed instruments providing a perfect frame for Trench's vocals whilst a cover of Pink Floyd's 'Matilda Mother' is a dreamily gorgeous psych wonder; again Howling Larsons stitch drones, experiments in ambience and truly psychedelic moments together with carefully crafted melodies and exquisite song writing. 'Beach Flute Song' is a perfect example of this; echoed vocals stretch over strings and woodwind in a pleasingly disorientating and utterly compelling fashion. There is something truly dreamlike about this album, almost hypnagogic. The songs feel like they exist at the liminal edge of wakefulness and dreaming; there is a familiarity in their harmonies but also a surreal quality to the sounds and atmosphere contained therein. This only enhances the albums enjoyment and accentuates its unique quality.

'Mask Of Winter' adds synth, backwards percussion, chimes and slide guitar to a gentle, otherworldly ballad with Loftiss's voice curling around the music like a soft flame. 'Landfall' utilises backwards voices and sounds that unsettle in just the right way as a descending guitar and cello line create a wintry and crystalline loveliness that reminds this listener of Backworld and In Gowan Ring, both fellow travellers in the world of wyrd folk. Indeed fans of IGR's work (as well as aficionados of Stone Breath) are well advised to acquaint themselves with The Howling Larsons. A splendidly twisted cover of 'Time Of The Season' follows before 'Stone' enchants with its reverberated acoustic warmth and melancholy. Closing track 'Midnight Folk' employs an orchestral passage that plays over a droning hum, drum crashes and a nursery rhyme style vocal melody. It is at once beguiling and also apocalyptic, beautiful and eerie, not unlike the album itself taken as a whole.

‘Midnight Folk’ needs to be heard. It is rare to find music infused with such creativity, ambition, emotion and vision, yet those qualities are here in riverfuls on this wonderful album. A plea from this listener; do not let this fine release slip by, your life and music collection will be the poorer for its absence. Stay up late, spend some time with The Midnight Folk.