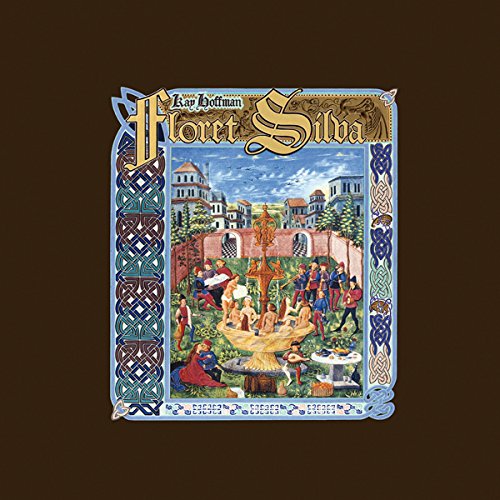 "This band sounds like group X meets group Y". We've all heard it but all too often it means a really crappy version of group X meets someone who once read about the Fall in the NME. At best, this lazy descriptive technique is mildly helpful. At worst .... we've all been disappointed by music that didn't meet the hype. So if I tell you the things that Kay Silverman's "Floret Silva" reminds me of Vashti Bunyan meets Henry Cow you've every right to be wary. Except this release is quite unique, greater than the sum of its parts. So here goes with attempting to make you believe that "Vashti Bunyan meets Henry Cow" isn't the worst description of any music since the last issue of the NME hit the newstands. Assuming it even still reviews music, or there are any newstands left.

What we have here is one of the few attempts to integrate Early Music and some form of funky jazz, or is it jazzy funk? Early Music and similar strands turned up as an influence mainly with English prog groups to a greater (Amazing Blondel) or lesser (Third Ear band or maybe Jethro Tull) extent, though this usually seemed like a subset of the widespread integration of classical elements. However none of those bands made much attempt to make a crumhorn swing. It's not entirely without precedent, English session musicians recording as The Roundtable, attempted something similar albeit with more of an easy listening/exotica ting and Baroque moves were adopted by the "swinging" US group Mariano and the Unbelievables. This rather unique project which was finally issued in Japan in the mid 80s remains far more sui generis and exudes none of the whiff of cheesy commercial cash in. Perhaps the nearest fellow travellers were Circulus who set off down this road twenty years later. "Floret Silva" is however distinguished from all of these by its rigour, its austerity and perhaps also its obscurity.

A lot of reissues with a strange back story fail to truly deliver. Their obscurity is often deserved, or at least understandable. Kay Hoffman's "Floret Silva" however is going to stand or fall on the music. The story is borderline dull, no UFO abductions or grand stages on farms in the middle of cornfields. One of the album's collaborators does have form for working with Faust that we could get some mileage out of. Really though the primary composer Kay Hoffman is a student of a variety of musical styles, Bartok, minimalism and renaissance music all get a mention though the primary focus was the 12th Century Carmina Burana texts. There it is, there's not much more to say to hype the back story. They went to Italy and recorded the music, but the deal fell through and it was only issued years later. The magic and mystery comes when you hear the intoxicating and by times austere music. Beautiful voices remind me of Vashti Bunyan, though the Latin and High German lyrics have no twee hippie folksiness. Strange woodwinds, polytonality and complex time signatures remind me of Henry Cow though without the aggressively difficult extended material. I doubt there was any awareness of those acts when this was recorded though, they're just the sounds this active listener was reminded of. Other listeners are bound to identify different reference points.

I suspect there are people who'll struggle with this album, or find it inconsistent, or even an incoherent amalgamation of ill-fitting parts. If you wander in and out of the room as it plays, you'll be greeted with a wide variety of sounds from stripped-down austere voice to whirring rhythmic keyboards and strange combinations of these and other elements. Yet given time it makes perfect sense as a well realised and unique artistic vision.

P.S. As a post script, during the preparation of this review I have remembered the existence of a third fellow traveller alongside The Roundtable and Circulus: Ray Manzarek's mid 70s setting of the "Carmina Burana". More or less regarded as a joke by serious rock fans, perhaps it too is due some critical reappraisal? That's another day's work and the critical heavy lifting involved may yet be too much for any normal reviewer.