The Green Pajamas - If You Knew What I Dreamed 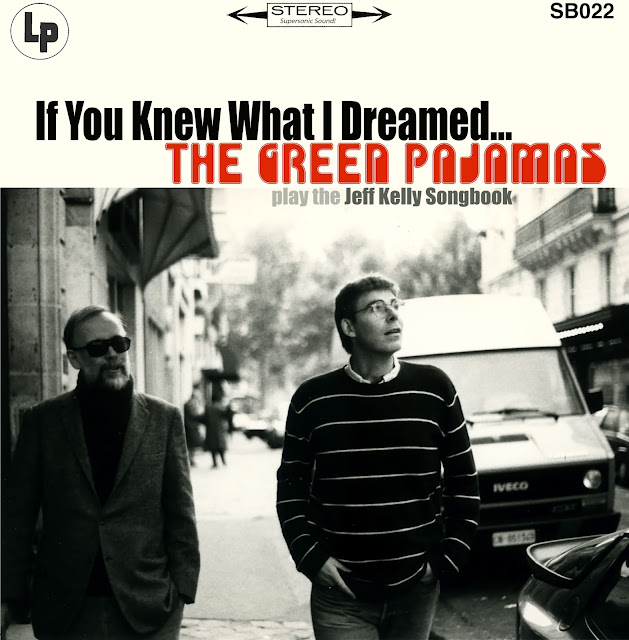 Now that you've had a chance to digest that wonderful new album by the Junipers let's take a look at another of the releases which accompanied it from Sugarbush Records.

I'm sure that you're all aware from my glowing reviews of Green Monkey Records' excellent archival reissues of the Green Pajamas mid-eighties albums of exactly how much I love this particular band. They may well be THE great lost pop band, still recording today, and with an enormous, rewarding back catalogue.

Jeff Kelly (who has always written the majority of Green Pajamas material) is a bit of a genius, a graduate from the classic school of pop songwriting who combines Beatlesque melodies with imagery you'd more reasonably expect to encounter in classic gothic literature. His songs often contrast chiming guitar riffs with wistful, melancholy melody lines in a way that leaves the listener expecting a twist around every corner. All of which makes the fact that this release focuses solo on Kelly's compositions a very good thing indeed. "If You Knew What I Dreamed" is a live-in-studio release with a few new songs and several GP deep cuts as well as fleshed out band arrangements of some of the very best tracks from Kelly's solo albums. The arrangements are tight and powerful, and I'd argue that every featured song that I've also encountered in it's original form is improved upon here. The new mastering from Green Monkey's Tom Dyer is immaculate too. Cut down from 16 tracks on the original digital version to 11 for the vinyl release, I'm a little sad to see "Raise Ravens", with its fevered guitar work and memorable lyrics ("..if you raise ravens, they'll peck out your eyes.." - there's that gothic melodrama again), miss out on a spot here, but what would you cut out to make room for it? I wouldn't want to have to make that decision.

What we do have here though ranges from the beautiful melancholy of "Panda in the Rain" to the jangly "Claire's Knee" - great songs that appear to come naturally to Kelly, bearing his own distinctive melodic touches. How he has been able to write so many songs of this quality over the last thirty years is quite beyond me.

Perhaps best of all is a dramatic arrangement of "Wait by the River" from Kelly's hard to find spy-jazz album "The Rosary and the House of Jade", originally released on a long out of print box set and heard by very few.

I won't say that this is the most obvious gateway to the Green Pajamas music. Indeed you could pick up any one of 20+ albums as a starting point and become obsessed with this band, so consistent is their output, without any real obvious standout. Far from being a slight, what I mean by this is that the GPs can join a very select few ( The Beatles, Bob Dylan etc.) where you could ask five people to choose their best album and get five different answers. It's subjective and there are few weak moments.

The vinyl edition is limited to 300 copies so if you want one of them you'd better swoop in here quickly. The newly remastered 11 track edition is also available digitally through the Bandcamp streaming link below, where you should listen immediately.

Also released at the same time on vinyl by Sugarbush Records is 8x8's excellent "Azalea's Room". I covered this here when it was originally released on CD and digitally. AlI that I can add to that review is that it's an album that continues to reveal new surprises even after several years, and that it sounds even better upon revisiting. The vinyl edition (again in limited quantities) is available here.