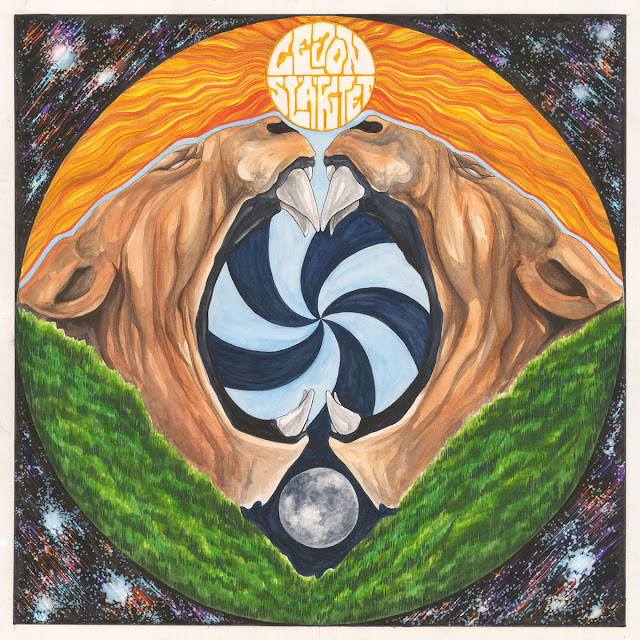 Sweden, as we all know, continues to produce more than its fair share of great music given its relatively sparse population. Lejonsläktet are the latest purveyors of slightly off-beam, vaguely mystical and blurry psychedelic pop. Following on from their impressive 45 on the always reliable Trouble In Mind last year (both sides included here), not to mention this fabulous free EP which had our editor foaming at mouth, here we have a full length debut LP (its on vinyl folks!) that scoops up some of their earlier works as well as a battery of new songs to set out a nine track tapestry of fascinating and compulsive listening.

Opener “Slapp Mig Fri” bounces over the ridge like a big friendly balloon man dispensing good vibes amidst an enveloping cloud of fuzzy guitar and watery keyboards. As an opening gambit it sure puts you in the mood for a good time. Driving instrumental “Trygghetens Rus” follows next with its combination of swedish legends Bob Hund new wave pranksterism and wordless, flashing by Beach Boys harmonising before evaporating into a vapour trail of wind chimes…I would imagine Julian Cope, driving at 120 mph on the motorway from Stockholm to Goteborg, would have this as a soundtrack – laughing maniacally all the way.

“Skogsvandringar” is a personal favourite amongst favourites with its maddeningly enticing guitar riff and Gregorian vocal intro. Its lazy yet intense and monolithic and makes me want to pull my brain out and rinse it on the banks of the Baltic. The slide guitar playing is a particularly sick delight reminding me of "Meddle" era Floyd grafted onto some outsider recording from the same era. Deadly combination of ear worm and brain injury. In fact the more I listen to it I am also caused to recall The Fall circa 1984. If they had taken more acid and less speed and were covering "Friends" by Led Zeppelin inside a giant hurdy-gurdy. This is an irresistably wonderful and frightening world being created for you by Lejonsläktet, and despite my frantic referencing, it sounds like little else I’ve heard for some time.

“Illa Gront” is another mystic trip that feeds off its predecessor and emerges slowly from shards of feedback and drone before flowering into a weird Skip Spence/Syd Barrett/Marc Bolan/Sonic Boom/Anton Newcombe acoustic led slow burner that launches at mid-point for the heavens with a burning organ line that you are hanging onto for dear life. Stunning.

“Vaderkvarn” is queasy and off-centre, replete with squiggly keyboard riff and loping rhythm driven along with nimble bass and semi-whispered vocals. Nice. “Ett Svagt Hopp Om” is psych-beat heaven – all farfisa and fuzz underpinned by driving bass, a dancefloor hit in some parallel universe for sure. Try not bobbing your head whilst listening to this one nice and LOUD. “Som Om Sanden Rinner Ut” has pagan drums and lovely Hammond splashes with an interesting line in Bolan-esque vocal delivery. Reminds me somewhat of Finnish neighbours Jarse or maybe Pollot who both put out great debut long players recently. This is a more groovy beast though and has that weird Scandinavian psych - funk thing going on. More brain fondu, dear? Don't mind if I do.

“Segla Ivag” hoves gently into view on the back of an exceptionally laid back ‘Take Fice’ rhythm – a real astronaut experience for the seasoned active listener as it orbits your rippling synapses. Beautiful and perhaps not dissimilar to a more diffuse Death and Vanilla or a more pastoral Broadcast if you really wanted some signposts. But you really don’t need them. You just need to investigate this great piece of work and let it wash over you. The ominous tones of “Du ar, jag ar, vi ar” bring things to a suitably fuzzy conclusion, sending the listener off on the golden road (to unlimited devotion).

Lejonsläktet really put it to the audience on this debut full length outing, confronting you with their soft parade, blinding you with their lamp of the cosmos. You get the feeling these guys know shit you don’t and they want to detonate it into your consciousness. 'Lejonsläktet' is as much the enactment of an ancient rite in sound as a slice of popular music squeezed onto 12” of plastic. It's a serious statement of intent. Go with it and get down with their sensurround. Now where did I put that bag of runestones?

Available as a free / name your price download through the Bandcamp link below, or on vinyl right here.