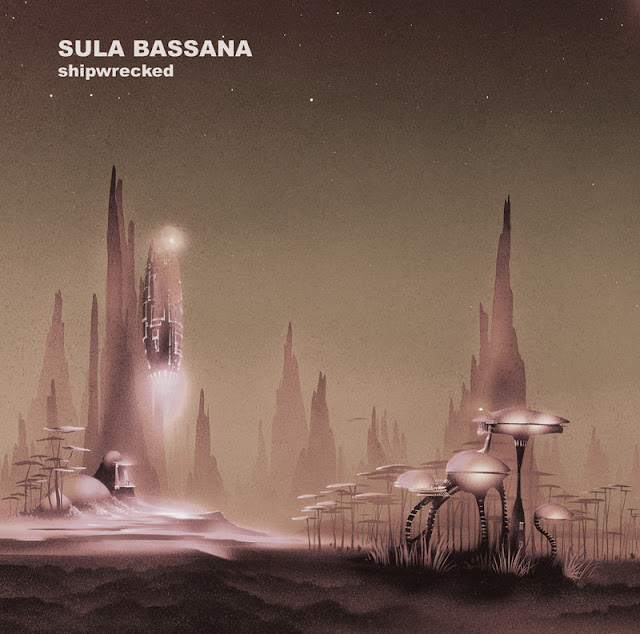 The latest from Germany’s Sula Bassana (Dave Schmidt who is featured in the likes of Electric Moon, Zone Six, Krautzone and Interkosmos as well) departs from the bombastic guitars and thundering rhythms of 2012’s "Dark Days" or 2009’s "The Night" for subtler shades of the same fervor. For loyalists, this one shares more in common with the 2014 split with 3AM, where sci-fi synth leads reign.

"Shipwrecked" (released on Schmidt’s own Sulatron Records) feels, from the very start, like a soundtrack, a concept album perhaps exploring the world of the wonderful cover art (by Frank Lewecke), linked by the nearly all electronic instrumentation and propulsive, Krautrock-inspired programmed rhythm. So, if you’re looking for those searing guitar solos, "Shipwrecked" lacks those; instead, it meditates upon often unnerving drones and several beautiful, cinematic passages (see the eponymous track for evidence).

“Moonbase Alpha Alpha” begins with what sounds like a breeze across an alien landscape, or perhaps it’s rocketry in the air. Then there’s a voice, heavily delayed, over the phasing atmospheric tones. It’s a promising start to the record, which continues to illustrate a futuristic, alien world. “No Time : No Eternity” sounds down-right other worldly as it plods through a menacing, cavernous beat and pulsates all the way toward the melancholic string accompaniment – a sentiment closing track, “No Way,” picks up, leaving listeners with a beautifully ambiguous close to the concept.

Sula Bassana has garnered enough respect in the psych listening community that Schmidt can really do what he pleases. This is a carefully constructed and interesting turn in his solo career, one that, for this listener, invigorates fandom and keeps the Sula catalogue as interesting as it first was upon first listen.

Digital versions of Shipwrecked are available on the band’s Bandcamp page linked below, where you’ll find links, too, for CDs and the few remaining vinyl.