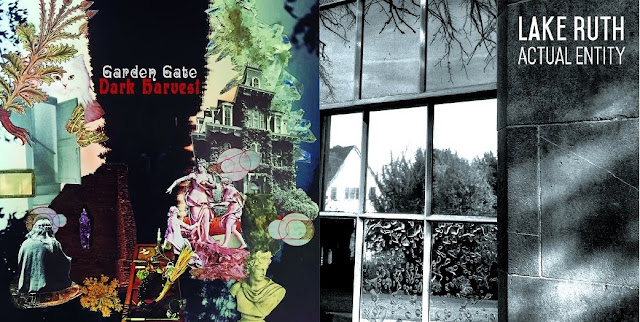 It's a scientifically proven fact that anything with the Great Pop Supplement's name on it is 'a sure thing'. No surprise then that this Lake Ruth LP is fantastic. Fans of the likes of post-Broadcast psych-poppers Gulp, Tara King TH as well as the last Neil's Children album will be thoroughly entranced by this forward-thinking yet backwards-glancing treasure. The unusually inventive rhythm section can take a lot of the credit here, but it's the vocals of Allison Brice that really grab attention. Formerly with underrated folk-rockers Eighteenth Day of May (who released their sole album on Joe Boyd's Hannibal label and also counted the Hanging Stars' / See Sees' Richard Olson among their number), Brice proves to have a fantastically versatile voice, progressing from the Sandy Denny / Maddy Prior sounding purity of her earlier band to the more mysterious fare found here with apparent ease. Her vocals are wrapped in a wooly blanket of sonic warmth on these tracks that suits it perfectly.

Lake Ruth's three members have certainly been listening to their early Broadcast albums (and who can blame them?) but plenty of other influences make themselves known too. From "A Victimless Crime"s Goblin / Tubular Bells backbone to the ghostly folk lament "One Night As I Lay On My Bed", this is an admirably ambitious release, and while it may draw inspiration from a number of disparate sources, the whole is impressively cohesive. These types of debut often sound like a band in search of direction, but Lake Ruth have nimbly sidestepped that oh so common hurdle and created a playspace for themselves where almost anything is possible.

Highlights are numerous but special mention to "The Timekeeper's Lament" which builds an irresistible pop hook upon a complex time signature which sounds like Ray Manzarek having a seizure. And then there's the marvelous space-pop nugget "Helium", which sounds exactly like the sort of thing Kubrick's star-child would light up and listen to when they have the space-den to themselves. A marvel.

Garden Gate are ploughing a similar furrow - one that marries vintage pop recording aesthetics with melodies that are naggingly familiar but difficult to place a finger on. There's often the sense that a huge, obvious hook lies just around the corner here, but rather than play it safe, Garden Gate's Timothy Meskers lives dangerously and bypasses the obvious. In his world 1+1=3 and at no point while listening to "Dark Harvest" will you feel the need to question his sums.

Eagle eyed readers may recognise Meskers' name, and with good reason: his previous outfit White Candles released a similarly entrancing EP through our own imprint, followed by a physical release on Sunstone (who are also releasing "Dark Harvest"). This is a natural extension of White Candles' material. The press release touts names like Silver Apples, White Noise and Ruth White, and while similar sonic territory is explored here, Meskers' songs are a much more obviously melodic proposition than the more challenging work proffered by those artists.  If you fancy the prospect of a world where Broadcast brought in George Martin to help on arrangements, step right in. The loose narrative involving a gothic heroine inadvertently discovering a strange doorway in a haunted mansion fits perfectly with these lovely baroque / psych-pop arrangements. Some lovely vintage synth sounds are a real treat too.

The vinyl pressing sold out before I even realised it was out (I'm kicking myself for that). But this can still be had digitally or on cassette through the Bandcamp streaming link below.