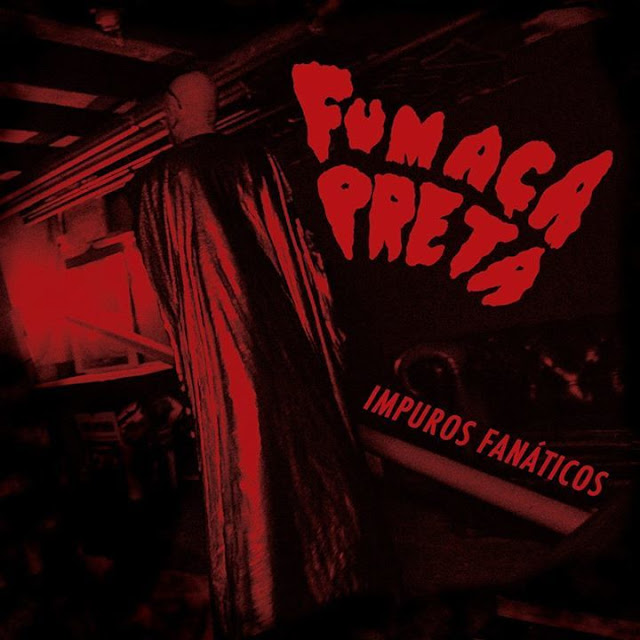 When Fumaça Preta’s self-titled debut was released toward the end of 2014, it instantly leapt to the top of my “Best Of” list for that year; I mean, instantly. It only took one listen for the band’s particular mix of Tropicalia, experimentalism, and general madness to sink its hooks into me and to make the band an instant favorite.

But, where "Fumaça Preta" came screaming out of the gate like a bat out of hell, "Impuros Fanáticos", by contrast, creeps up on you like a spectre in the night.

It opens with the sound of a guitar crashing to the ground in the distance, howling wind, and the sound of a flute, fluttering like a frightened little bird. Then, a creeping, atmospheric groove comes into focus, sounding like the lost soundtrack to an old film noir. It is from that groove that bandleader Alex Figueria’s panicked vocal emerges, pleading in Portuguese. Where, on the first album, there was hysteria, here, there is desperation.

While atmosphere is the rule of the day here, the groove drives everything forward, as it always has with this drummer-led band. “Baldonero” emerges from the muck with an angry-sounding surf guitar playing against a Bossabeat and a pulsing bass line. And “Decimo Andar” raises the ante in the energy department, finally getting the motor running at full speed.

But, it’s not until near the end of the record—with the one-two punch of “Ressace Da Gloria” and “La Trampa”—that the band achieves the same level of in-your-face intensity that it pretty much maintained throughout their entire debut. That said, it’s anything but late in arriving. By the time the throttle is opened, the groove and atmosphere has already lulled the listener into an alternate state of consciousness, grooving along on a haze of mid-tempo voodoo funk, making the explosion at the end all the more effective by what preceded. So, when it kicks, it KICKS. It’s a masterful display of the power of sequencing.

Fumaça Preta remains one of the most interesting and exciting bands making music today. Jumbling together acid, Tropicalia, funk, jazz, samba, and anything else that catches their fancy in a musical blender that’s set to “liquefy.”

Yes, "Impuros Fanáticos" is a more-subdued affair than the first album, but when you drop the needle on this one, it doesn’t let go of you until the final fade. You’ll find yourself catching your breath without ever realizing that you lost it. Yes, they are that good.

CD, vinyl and digital available here (UK/EU), or here (US).