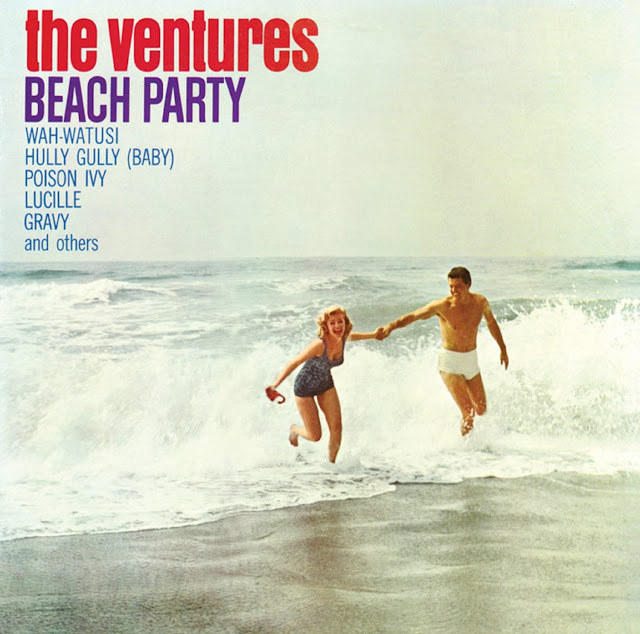 The Ventures get a bit of a rough deal when it comes to appraising the surf bands of the early sixties. It's certainly true that they stuck around for much longer than they should have, with diminishing returns setting in by the very late sixties / early seventies, but the run of albums they released up until around 1968 are more often than not very entertaining affairs, with (depending who you ask) at least five to ten of them making for some fairly essential listening - often much better listening than the numerous 'hits' collections on the market which bypass a lot of their more interesting album material ("The Creeper" anyone?!).

Cherry Red's El Records label has just reissued one of their harder to find original LPs, 1962's "Beach Party" (also known as "Mashed Potatoes and Gravy"), and while it's not quite up to the very high standard of 1963's sci-fi surf opus "The Ventures in Space", or 1966's superhero themed "The Ventures Play The Batman Theme", it's one of the band's most enjoyable outings in a more purely surf-oriented vein.

It's a nicely varied affair too. "Lucille" is given a bendy twist, and there's a great version of "Poison Ivy" which is right up there with Billy Thorpe & The Aztecs' phenomenal version - two excellent examples of the band's knack for recasting popular vocal tunes in a purely instrumental setting without them feeling like backing tracks. There's also plenty of fun mashed potato referencing rock n roll too, not to mention a definitive take on the Lively Ones' "Surf Rider" (actually written by the Ventures' Nokie Edwards"), here recast as "Spudnik". Best of all though are the moody minor key numbers; "Hernando's Hideaway" and the slinky spy guitars of "Hot Summer (Asian Mashed)". If there was ever a Get Smart episode set in Chinatown, this would have provided the perfect soundtrack. Not bad work for a band that released five albums in 1962 alone!

Aside from the original twelve track album, this new edition features 22 bonus tracks as a sort of 'best of' sampler from the band's first nine albums, as well as covers of the band's biggest hit "Walk Don't Run" by Johnny Smith and Chet Atkins. "Beach Party" on its own is a thoroughly worthwhile purchase, these added bonus tracks make this the perfect sampler of the band's early career, providing lots of the hits, as well as a hint of the unexpected pleasures to be found when investigating their albums in greater depth. Recommended!