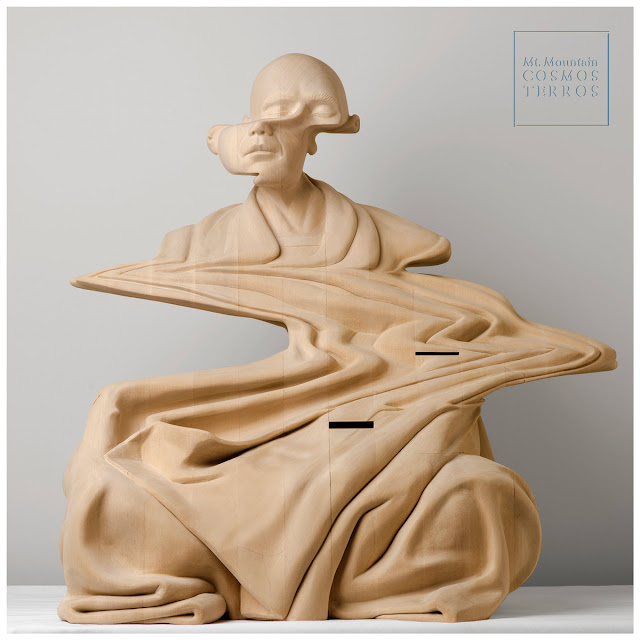 It seems that in recent years Australia has been steadily ahead of the curve in regards to musical trends, so much so that I can almost pick up on motifs that are distinctly Australian.

And now Mt. Mountain is among those pace setters, performing adept heavy psych on “Cosmos Terros” that cultivates those expansive, open passages and dense, behemoth riffs. For a debut full length – after a string of EPs and a 7” – Mt. Mountain comes out strong just four years after their formation in Perth. Consisting of 6 long-form songs, “Cosmos Terros” heralds the arrival of a forceful and finely tuned outfit. Equally meditative in their song structure and tumultuous in their execution, Mt. Mountain is a worthwhile excursion into a melding of heady doom, thunderous rhythms and shimmering landscapes.

As an intro, “Seek the Sun” provides counterpoint in some ways to what follows. It lulls the listener – perhaps falsely – while the following songs shake anyone within a wide radius awake.

The core of the album consists of three heavy tracks: “Freida,” “Elevation” and “Moon Desire.” Each song develops differently their paths, but the effect, in the end, is an unabashed, cosmic jam when they each come to a close. “Freida,” the lead single of the album, builds to fervor before “Elavation” introduces a propulsive beat and warbling guitars. The conclusion here feels natural and inevitable, so that, as “Elevation” crashes through the wah-wah heavy outro, “Moon Desire” provides the release – a head banging slow-burner that channels the shamanistic side of metal that’s come to the forefront in recent years.

Already laurelled and revered – named 2014 Breakthrough Artist of the Year at the WAMi Awards – Mt. Mountain will only gain tread in the years to come. Having shared stages with the likes of Sleep, Mono, Thee Oh Sees, Earthless, King Gizzard and the Lizard Wizard and Boris, Mt. Mountain has carved a niche for themselves as a furious and dedicated live act. If you get a chance to see them, do so and pick up a record while you’re there. Otherwise, “Cosmos Terros” is available digitally or on variously colored vinyl from their Bandcamp page linked below.