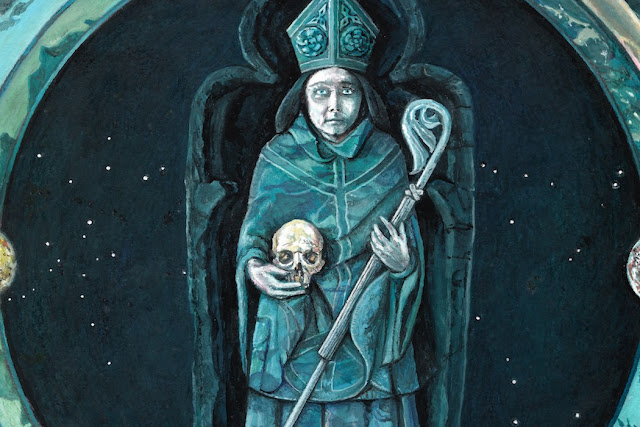 'Sjóraust' is the latest release from the prolific Richard Moult; composer, artist, poet, frequent collaborator with the likes of Alison O'Donnell, David Colohan and member of wyrd folk collective United Bible Studies. Recorded and inspired by his wild and weather beaten home base of the Scottish Outer Hebrides, the ghosts of both previous Gaelic and Norse inhabitants permeate this recording, giving the album its title; an amalgamation of two Norse words meaning 'Sea Voice'.

Moult explains 'When Glen (from the Second Language label) asked me to record an album for Second Language documenting the landscapes of the Outer Hebrides, I initially spent a brief time walking the beaches where I live, thinking how best to approach this project. Eventually, as I looked out into the abyssal Atlantic, time dropped away, and all that then seemed to possess my consciousness was the voice of the sea... From that moment on, I needed only that voice to dictate the music. And so this six movement work was quickly born from the tides, the songs of birds, and the chants of the saints who lie beneath the machair'. And indeed this is an album that feels borne of the rolling and endless horizon, the sound of the distant waves and the ever present wind, as well as moments of stillness and beautiful isolation.

The album is split into six movements or set pieces, each a separate work in its own right and with its own emotional impact and affect, yet they also seamlessly bleed and weave into each other to create a majestic and truly satisfying whole. 'Sjóraust I' opens with plucked strings from David Colohan's autoharp as the sound of waves rolling in and off a shoreline comes ever closer. Bowed strings and cello accompany as a melancholic yet defiant tension is created; a fitting backdrop to the ancient Gaelic text being recited. The atmosphere of nature and of the wild is almost tangible, it raises the hairs on the back of your neck. This piece then intertwines with the album's second movement as more strings join to create a chamber work filled with both a sense of wonder and sadness. Retreating into a more minimalist mood, 'Sjóraust III' utilises Moult's emotive and evocative piano playing alongside Amanda Feery's clarinet to conjure a sound that is delicately haunting and utterly moving. Time seems to stop for this music and consequently for the listener also; these pieces paint such a picture of the isles that the land's still solitude and ancient nature is ably brought to life. A spectral choir emerges through the musical twilight, Colohan's autoharp joining then departing the sombre and angelic score. Reminding this listener of the more sacred sounding of Popol Vuh's works and also of Gorecki's 'Sorrowful Songs', this is truly spellbinding piece of music.

Next, 'Sjóraust IV' is an ever layering work, strings, autoharp and cello building and swelling upon Moult's piano like a tempest building far out at sea. Moult (and collaborator David Colohan) are masters at creating a musical tapestry that positions the listener immediately within the feel and sounds of nature, the elements are almost present on every play. 'Sjóraust V' is introduced by Oscar Strik's powerful reading of the mathematical tract 'Rim II' and is a symphonic and transcendent slice of sheer beauty. There is a sense of dignity and peace here amongst the solitude and howling winds. Alison O'Donnell (Mellow Candle, United Bible Studies) adds her distinctive and, frankly, incredible vocals to the album's finale ''Sjóraust VI' to excellent effect, the piece ebbing and flowing with Ellen Hoperay's baroque flute and the clamour of chimes and bells as a mass of strings punctuate the darkness. And then, as if a storm has passed by overhead leaving a sudden and noticeable silence, the album is over.

This is a breathtaking work and one that should appeal not only to lovers of psych and acid folk but also to aficionados of the avant garde side of modern classical, to fans of Human Greed, Fovea Hex and the afore mentioned Popol Vuh and perhaps also Tangerine Dream. There are multiple heartstopping moments contained herein, this is a beautiful and unique recording, a wild cry of nature.

Available here on the superb Second Language label as a CD in a lovely four panel gatefold sleeve.