Tales of Justine - Petals From A Sunflower: Complete Recordings 1967-69 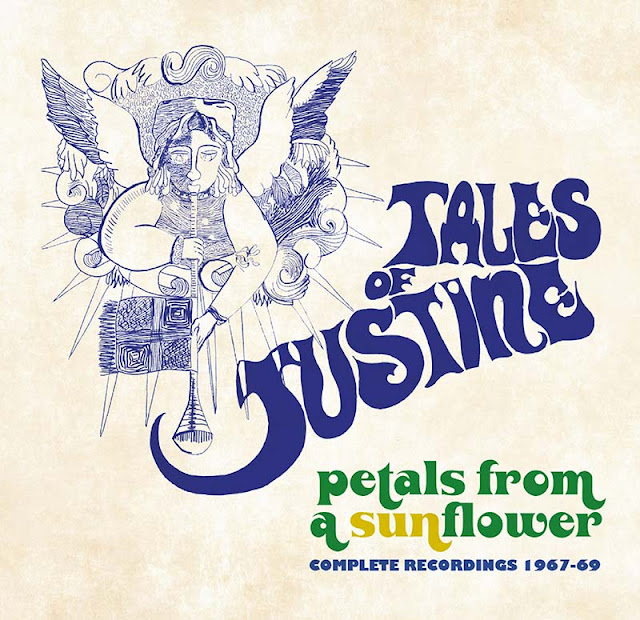 With a frontman distantly related to the Who's Roger Daltrey and management from future gazillionaires Tim Rice and Andrew Lloyd Webber, the Tales of Justine is one of those bands that it's very easy to assume have a more interesting backstory than output.

Enter "Petals from a Sunflower", the first ever CD collection of their complete recorded works (an earlier vinyl-only collection on Tenth Planet included around two thirds of the content of this collection) which aims to dispel this illusion.

Signed by Rice (then an A&R man for EMI) and Lloyd-Webber in 1967 based primarily on the potential star quality of 15 year old singer / guitarist / songwriter David Daltrey, Tales of Justine's future looked bright. Rice's influence allowed access to the bright halls of Abbey Road studios, holy ground for a young singer enthralled by the sounds of the Syd Barrett led Pink Floyd.

An initial batch of politely freaky psych-pop demos recorded at Abbey Road (all included here) impressed the label big wigs enough to secure a single release, the Lloyd-Webber arranged "Albert" / "Monday Morning". Unfortunately the a-side was one of Daltrey's weaker numbers, and despite a number of favourable reviews, the single sank without a trace. Daltrey himself was reluctant to issue "Albert" as the a-side, and Rice is now of the opinion that had the single been flipped, things could have been very different for the band. "Monday Morning" certainly would have made a great single, with its anthemic chorus and psychedelic guitar / keyboard duel promising much. It's been widely comped since.

That wasn't the end for Tales of Justine (who had by now dropped the definitive article from their name) though. There was plenty more to come and their best work was still ahead of them. "Sitting on a Blunstone" is perhaps their masterwork, a mystical raga recorded on a two track in a tiny publishing studio as a publishing demo. The fact that Rice and Lloyd-Webber never saw fit to give it the proper Abbey Road treatment shows just how little they understood of Daltrey's vision, but their influence wasn't wholly negative.

Lloyd-Webber had spent some time observing the sessions for Mark Wirtz's "Teenage Opera" and when it came time again for Tales of Justine to enter Abbey Road, everything but the kitchen sink was utilised. The results were uniformly impressive, from the moody "Pathway" to the jaunty "Jupiter" to the absolutely glorious " Morpheus", which captures, and improves upon the orchestrated pop psych vibe of Aphrodite's Child's "Rain & Tears" absolutely perfectly.

EMI showed no interest in releasing it though, and Rice and Lloyd-Webber were more interested in their own "Joseph and the Amazing Technicolour Dreamcoat" (which Daltrey had a starring role in).

Several Daltrey solo sessions followed, the results of which are also here, but psychedelia was passing out of favour and management's attempts to reinvent Daltrey in a Scott Walker meets Lulu vein continued to leave the label unimpressed.

Aside from a few live dates, that spelled the end of Tales of Justine. Daltrey was eventually released from EMI's clutches, joining the band Carillion, who would eventually morph (without Daltrey) into the rather excellent wannabe Byrds band Starry Eyed and Laughing.

Everything that Tales of Justine recorded is here, and it sounds exactly like what it is:a promising young band being poked and prodded in directions that they're not necessarily comfortable with, but generally transcending the situation they found themselves in to deliver material that deserved more recognition. There are a handful of unknown classics here that are absolutely essential for UK psych aficionados, although the band's fluffier leanings make this more one for lovers of pop-psych than psych-pop.