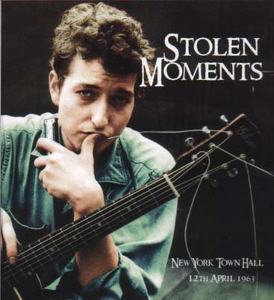 Recorded by CBS and prepared for an official release back in the sixties Dylan was producing new material at such an alarming rate that there never seemed an opportune moment for this to be released.
Bootleg's have circulated for some time now, mostly sourced from test acetates but never before has the full show been made available in such incredible sound quality.
Fans have hoped for it's release as part of the official Bootleg Series for years now and the Hollow Horn label has beaten Sony to the punch with this excellent package.
The performance is one of the best solo acoustic shows of Dylan' s that I've heard and the rarity heavy tracklisting makes it a far more interesting release than the 1964 Halloween show which was released in the Bootleg Series.
One of Dylan's first major concert appearances ( this was recorded before the release of Freewheelin' ) Dylan is in jovial and charming form and very focused.
Much of the material on here has yet to see release in any other form.
Of these, the best tracks are Dusty Old Fairgrounds, later covered by 70's power poppers Blue Ash, and Hiding Too Long ( You've Been Hiding Too Long Behind The American Flag ).
Hero Blues was later recorded in the studio during the Times They Are A Changin' sessions and circulates as a bootleg.
It and New Orleans Rag are humorous pieces that would have fit in with the lighter material on Another Side of Bob Dylan.

An essential piece of Dylan lore and one of the best bootlegs I've ever come across.

Download Links removed at Sony's request. Hopefully this means they are intending to release this officially....