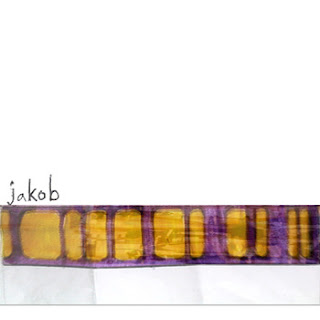 Napier band Jakob are one of New Zealand's best kept secrets. Often lumped in with the much maligned post-rock scene, they do share superficial similarities with bands like Mogwai, but on the whole their approach has more in common with Sigur Ros. Like Sigur Ros, their music evokes their surrounding landscape - in Jakob's case, hilly coastal areas and widereaching plains.
They've toured extensively in the States, and have supported or toured with Isis, Tool and Mono among others.
This, their first release is marketed as an e.p, but the six tracks on offer here are longer than most albums.
Recorded with long serving engineer David Holmes, it's remarkable how fully formed their sound was at this very early stage, and as consistently great as their back catalogue is I'd have to pick this as my favourite. Which is a pity because it's also their hardest material to track down. The CD version is long out of print, but the band's website do offer it as a high quality digital download ( link below ).
Opener, Verstaeker' s repeated motif unobtrusively fades in on waves of delayed clean guitar, ratcheting up the tension until the band come crashing in. The production is great - you'd swear the drums were in the room with you.
My personal fave, Can We Come In rides a hypnotic hi-hat riff to breaking point and shows an almost Krautrock approach to repetition.
Means is a twenty five minute monster of a track which peaks a ridiculous amount of times and points towards their epic Dominion E.P.
They've released three full albums and another E.P since this came out in 1999, and are currently working on album number 4 which should see release early 2012.
A great band well worth investigating, and if you ever get the chance to see them live run don't walk to get your tickets.

You can stream the whole thing below - give Verstaeker a chance to get going - the media player is working, the fade up is just very quiet for the first minute or so.