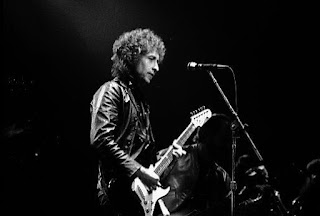 Following on from last week's Sixties and Seventies feature here's a look at some classic Dylan eighties tracks which have flown under the radar.

What Can I Do For You?
Saved is undoubtedly Dylan's most unpopular album. While albums like Knocked Out Loaded are almost universally panned, Saved steps it up one step further and is actively hated by most Dylan fans. The most devout of his born again albums, it's almost entirely a write off lyrically but includes some of Dylan's most intense performances. I'll go on the record as saying that I believe that What Can I Do For You contains Dylan's best harmonica performance. Nuff said.

Foot Of Pride
In the context of Dylan's eighties albums, Infidels is pretty great. But it could have been so much better had certain tracks not been left in the vaults. Blind Willie McTell is the acknowledged classic outtake, but I prefer Foot of Pride which share's it's impenetrable biblical lyrics but ratchets up the intensity on the performance front. Lou Reed chose to cover this at Bob's birthday bash, proving that pre Lulu he was a pretty dab hand at choosing worthwhile material.

Dark Eyes
Tacked onto the end of the incredibly dated Empire Burlesque album is this wonderful gem of an acoustic ballad - the first solo acoustic performance to make it onto one of Dylan's records since Blood On The Tracks, and not coincidentally one of his best tracks since then too.

Band of the Hand
Teaming up with Tom Petty & the Heartbreakers was the beginning of the turnaround for Bob's rotten eighties. While the resultant album ( Knocked Out Loaded ) wasn't up to much, this stand alone single and the resultant tour promised a creative renaissance which was to slowly flourish over the next few years.

Rank Strangers
Down in the Groove was still patchy but his choice of cover's material was leading him back to his roots. This lovely acoustic reading of the Louvin Brother's classic pointed towards his fabulous Good As I Been To You and World Gone Wrong albums from the nineties.

Tweeter & The Monkeyman
The importance of Bob's time in the Traveling Wilburries cannot be overstated. Bob seemed like he was having fun making music again and with the pressure off he came up with this carefree Springsteen pastiche.

Man In The Long Black Coat
Oh Mercy was where things all clicked again for Bob. Don't let the garish cover put you off - this would have been a classic no matter when it was released. Man in the Long Black Coat is a masterclass in atmosphere aided by the wonderful Daniel Lanois.

Born In Time
It's telling that the best track on Under the Red Sky was a  track Dylan didn't think was good enough to go on Oh Mercy. Great stuff but better was to come in the nineties.