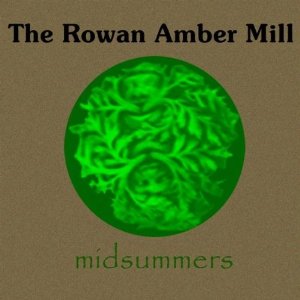 Deserving of far more attention than they're likely to ever receive, The Rowan Amber Mill are one of the U.K's best kept secrets.
Drawing from the same well of acid folk inspiration as kindred spirits The Owl Service, The Rowans operate on a decidedly more earthy level. They call their music Woodland Folkadelica and that seems to be a pretty fitting description.
Midsummers is marketed as a mini album, clocking in at around 35 minutes and is probably the best starting point for the uninitiated.
Their arrangements feature mostly acoustic instrumentation, layered with washes of subtle, textural keyboards, which I expected to feel out of place but are mostly pretty unobtrusive and add to the atmosphere.
Their line up has shifted around somewhat, and is at it's strongest here with multi instrumentalist and Rowan's brainchild Stephen Stannard joined by the wonderful Kim Guy on vocals and Terrey Stacey on drums.
They set out their stall right away with a lovely, dark pagan version of Sumer Is A Cumen In, a traditional ballad used to great effect in the Wicker Man, and improved upon here. It's reprised several times - once as a jaunty medievale carnivale piece which is the albums only misstep and again in a more
moody, mostly instrumental mix with creepy hushed vocals. Lovely.
Elsewhere, Stannard's own compostions are just as strong, with Blood and Bones leading the pack and sounding like a lost piece of late 60's acid folk rock, along the lines of Trees or Mellow Candle. Greenwood is a moodier vocal piece, inspired by the wonderful czech film Valerie and Her Week of Wonders and again showcasing Guy's wonderful vocals.
Another highlight is Midsummers where over the background ambiance of a crackling fire, snippets from the previous tracks drift in and out of view like dreams.
Blood and Bones (2009) by The Rowan Amber Mill

They've since released a full album, which is also great, and I'll write about later and Stephen, now solo is working on more new material.

You can buy their recordings very cheaply directly from them here : http://www.millersounds.co.uk/

If you like this you may also like :
The Owl Service - a Garland Of Song
Candidate - Nuada