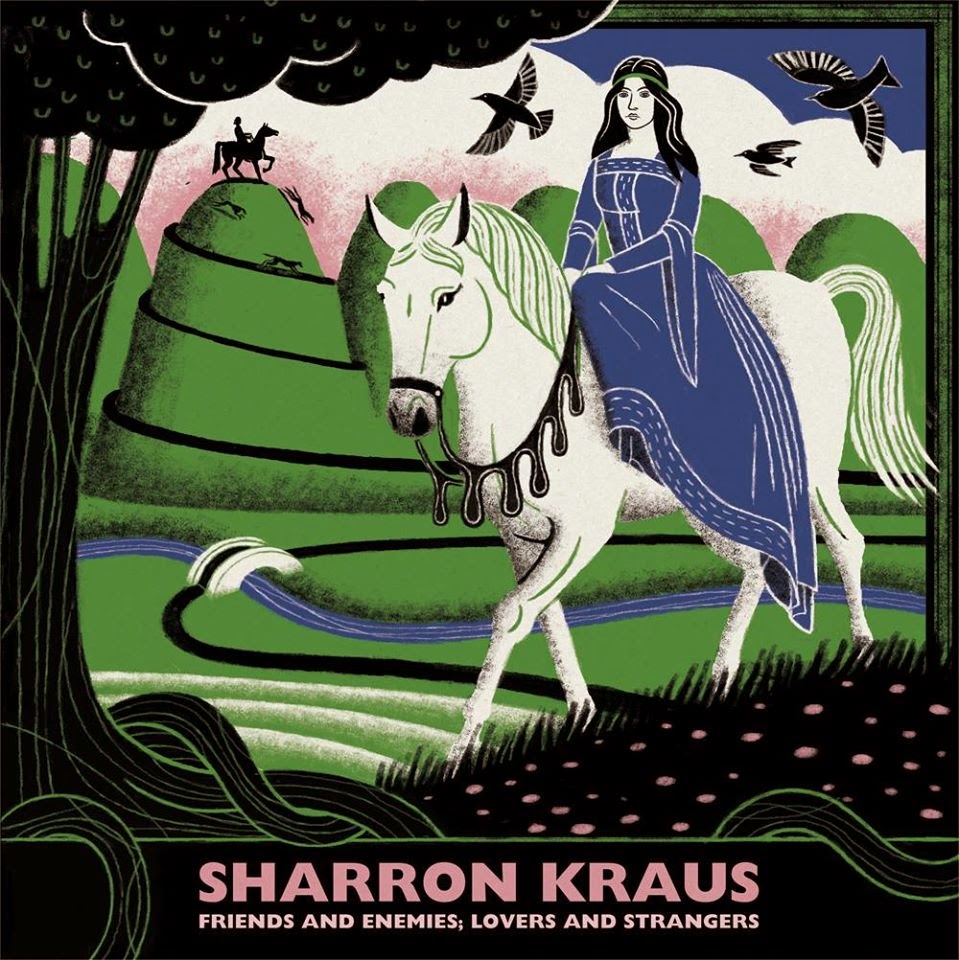 Sharron Kraus should be a name that is familiar to all lovers of psych and modern acid folk. For the last 13 or so years she has tirelessly been releasing classic and timeless wyrd folk both under her own name and with contemporaries and friends such as United Bible Studies member Michael Tanner, Gillian Chadwick of Ex-Reverie (under the name Rusalnaia), as Traveller's Two with Fursaxa's Tara Burke and with US psych legends The Iditarod. On this, her debut for the ever splendid Clay Pipe Music, Kraus has assembled a magical collection of songs inspired by the Welsh folktale compendium The Mabinogi. Inspired by her time living in rural Wales and ably backed by Harriet Earis's harp, Nancy Wallace (of The Owl Service) on vocals and Directorsound's Nick Palmer on piano, Kraus has created an utterly spellbinding thing of beauty and wonder. As otherworldly as the folk tales that inspired the music, this is an album that demands complete, rapt attention and careful listening.

'My Friend’s Enemy' is a woodland lament; spectral harp and recorder intertwine beneath the eerie and haunting twin vocals of both Kraus and Wallace; reminiscent of such psych holy grails as Mellow Candle’s 'Swaddling Songs' and more recent masterpieces such as Espers' debut album, this is a quietly dramatic and deeply evocative work. ‘The Hunter’ is more pensive, a stately, processionary and cautionary musical tale framed with bewitching choral harmonies, bowed dulcimer and shimmering guitar. The song itself sways and shimmies as if darting between trees in some darkened woodland. Next, 'Branwen' opens with intricate acoustic guitars and veritable waterfalls of harp, its melancholy tale beautifully framed in its baroque setting. Kraus’s vocals are expressive, crystal clear and tinged with a ghostly aspect; there is something ancient and timeless in her voice as she recounts these age old stories and legends. 'A Hero's Death' adds warmth in its acoustic arpeggios and is jauntier, almost a jig, albeit a medieval sounding one.

The chamber folk that soundtracks these tales deserves special mention; perfectly and sensitively pitched and never over frilly but instead earthy and with a rough beauty. It is at once unique and also oddly familiar, as if part of some ancient collective unconscious. 'The Birds Of Rhiannon' puts the vocals of Wallace and Kraus together again to stunning effect amid a bed of recorder, chimes and organ. Majestic, mysterious and mournful the drones that underpin the song add their own unearthly air to proceedings. 'A Quiet Place' follows; a mellower and warmly introspective piece which makes effective use of the twin vocal harmonies and is propelled forward by layered, gossamer threads of harp. Curiously it reminds this listener of some of the Burning World-era Swans numbers that were performed by vocalist Jarboe. There is the same sense of beauty but also foreboding. 'Farewell’s bowed dulcimer and stately air is almost Appalachian (but then many ballads and myths travelled from the Celtic countries to the Americas), a siren’s song of loss and of the lost. It is utterly transfixing and seems to cast eyes back on a long left homeland. 'Blodeuwedd' is a delicate acid folk piece, built primarily on harp and recorder, again with an undertow of sorrow and regret but also magic. 'Stranger In Your Land' ends the album, perhaps autobiographical, certainly heartfelt and with a grandeur and grace that befits the closing of such a special and unique recording. Organ, guitar and harp wisp and whirl around Kraus’s voice, a fairy tale ending.

I cannot recommend this album highly enough. As a long term admirer of Kraus’s work I have grown accustomed to a high degree of quality and ambition in each of her subsequent releases but this album in particular feels to be in a world, space and time of its own. Gather round in the dark, pull the blankets tighter, ignore the wind whistling through the trees and listen to some very old tales indeed.

Available from the splendid Clay Pipe label in a run of 500 numbered vinyl copies with download code and illustrated booklet, pre-orders began on April 13th for eventual release on the 18th May. The album also comes in a truly beautifully designed and painted sleeve by label owner Frances Castle. Clay Pipe's output always comes with a high quality of packing and artwork and this is no different.