The Amorphous Androgynous "A Monstrous Psychedelic Bubble (Exploding In Your Mind) Vol. 4 - The Wizards of Oz" 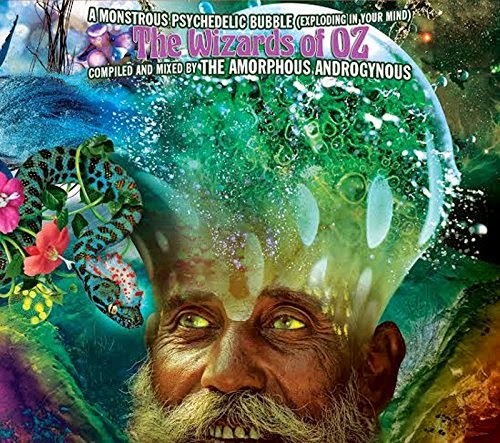 It's been a long time since the last entry in this series, but the Future Sound of London boys have been keeping themselves very busy producing Noel Gallagher, remixing Syd Arthur, and putting out their own "Cartel" albums. Somehow, this busy schedule has left them time to dig through innumerable crates to find the excruciatingly rare Australasian psychedelic / progressive rock gems that form the backbone for this release.

Sourcing original copies of many of these albums (should you even be able to find them) would be a cripplingly expensive exercise, such is the rareness and obscurity of much of what you will hear here. Indeed Garry Cobain and Brian Dougans admit that many of the delights contained within were unknown to them before they began the gargantuan task of accumulating these tracks.

Noticeably light on tracks from here in New Zealand (we were never particularly out-there, so probably a good aesthetic choice), "The Wizards of Oz" does a fabulous job of joining the dots between the then and the now of Australian psychedelia, illustrated perfectly by its opening salvo; Russel Morris's epic kitchen-sink production "The Real Thing" is one of the best singles of the sixties from anywhere, and following it up with Tame Impala's recent "It Is Not Meant To Be" is an inspired move, showing simultaneously just how forward-thinking "The Real Thing" was, and also how comfortably its more recent offspring can keep company with the big boys.

The duo do a great job of mixing these tracks into a surprisingly timeless sounding mix, with even tracks sourced from eighties revivalists (Sunset Strip, The Tyrnaround) avoiding the big, brash production issues of the times.

Perhaps the most surprising discovery here is just how cosmic a lot of this music is. Recent reissues, and blogs aplenty have made us aware of Cybotron over the last few years, but it would appear that there's plenty more below the surface too, with Leong Lau's "Salem Abdullah"from 1977 pulling a lot of the same strings as the second side of "Low".

Consider yourself warned though. This is likely to be an expense-inducing puchase. The album itself is very reasonably priced, but there is a lot of stuff on here that you're going to want to investigate further, some of which has been reissued recently, but a lot of which you'll need to dig much deeper for. We can simultaneously thank, and curse the Amorphous Androgynous for getting us started.