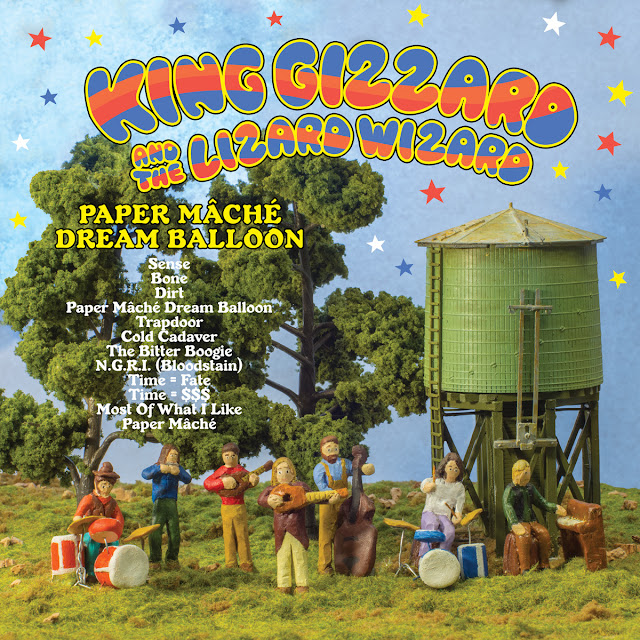 I have to tell you dear active listener that I have been a very unwell reviewer of late. I have had a dose of the rocking pneumonia as Chuck Berry once said. It has been tough but thankfully I have the new King Gizzard record to act as a remedy and what a tonic it is.

The new offering is called 'Paper Mache Dream Balloon' and it is a blast from start to finish, cementing their place as Australia's premier purveyors of psych madness. Now, you may have already heard about this record, and how some scribes have been comparing it to 'Da Capo' era Love. I believe this to be borne of the fact that there is much flute on this record. However, any comparisons with Arthur Lee's LA crew are way off beam, this record has almost nothing of the Latin textures and barely concealed introspection that ran through baroque era Love output like a stick of rock. This record is firmly rooted in the UK psych tradition with much more of a Traffic or Beatles feel to it. I am particularly reminded of material to be found on the first two Traffic lp's - whimsical, tripped out innocence and bright arrangements with interesting instrumentation adding colour to the compositions.

In a conscious departure by the band from recent lp length offerings, the record consists of 14 short and sweet, psych-pop tracks, that maintain a high level of quality throughout. The lengthy explorations of 'Quarters' and endless regurgitation of 'I'm In Your Mind Fuzz' are jettisoned in favour of a 'traditional' song based collection with an emphasis on laid back, fairly stoned folky grooves. Opener, 'Sense' brings you straight to the Gizzard table with its opening announcement that to be materialistic and feckless is in fashion. These pronouncements are couched in the same laid back sunny vibe that characterised the Drug Cabin record, "Wiggle Room", which did so much to light up the earlier parts of 2015. It just about gets itself together enough to have you humming along to its gentle musing, all acoustic guitar and meandering woodwind. 'Bone' follows shortly thereafter and is perhaps the closest we get to Arthur Lee territory but is way too bright and warm to be introspective with its cuckoo flute lines and summertime strumming - its just a perfect 2 minute pop song. 'Dirt' follows a similar trajectory with lovely flute and guitar interplay and nice vocal harmonies delivering soothing tones over the top, definitely reminding me of later era work by recently reactivated pop-psych genius Kurt Heasley and his Lilys. And boy its another instant classic - I wonder if Iggy has heard it?

'Trapdoor' is a demented masterpiece, whch may or may not be based on a fever dream of the kids tv programme of the same name from the 1980's where plasticine creatures roamed a dank castle forever in search of people to scare. Its a real curveball of a song, puncturing as it does the serenity of the songs that surround it. Nothing like being wrong-footed though eh? The celebratory ghoulishness of the following 'Cold Cadaver' is another exercise in perversity that reaps rich reward with its insane catchiness.

'Bitter Boogie' treads a well-worn path, nicking the riff from 'Spirit in the Sky' by Norman Greenbaum or 'Orgone Accumulator' by the peerless Hawkwind, or maybe even 'Golden Retriever' by the happily twisted Super Furry Animals. Hell, this may even be inspired by 'On the Road Again' by Canned Heat - it has that instantly recognisable blues riffing that gets your head bobbing and your foot tapping as you bop across the kitchen to grab a beer from the fridge. 'Bloodstain' has hammering piano and a rocksteady beat that Dee Dee Ramone would have dug if here were still with us. 'Time=Fate' is a weird trip - all serpentine melody and super stoned vocals with nonsensical lyrics. Not unlike Pavement come to think of it. 'Most of What I Like' is sweet and memorable with its lovely starry night vocal arrangements, tastefully bold woodwind lines and lazy bossa beat. Closing collage number 'Paper Mache' successfully nicks the riff from every song of the 13 tracks preceding it utilising acoustic guitar and flute in a rural medley of sunny feel good vibes. This mellow mood is promptly turned on its head at the final denouement of the track as the tape is flipped and run backwards at high speed before spinning off into the sky.

And so it came to pass, King Gizzard released a full length record of actual tunes and it was pretty much an amazing experience. Where do they go next? Have they found their forte? My guess would be they do something completely different again as their restlessness will mean they will give the finger to any formula. Either way Paper Mache Dream Balloon is a perfect way to end a very strong year for new releases. Its fair dinkum and up, up and away!

Vinyl and CD available here (US) and here (UK).