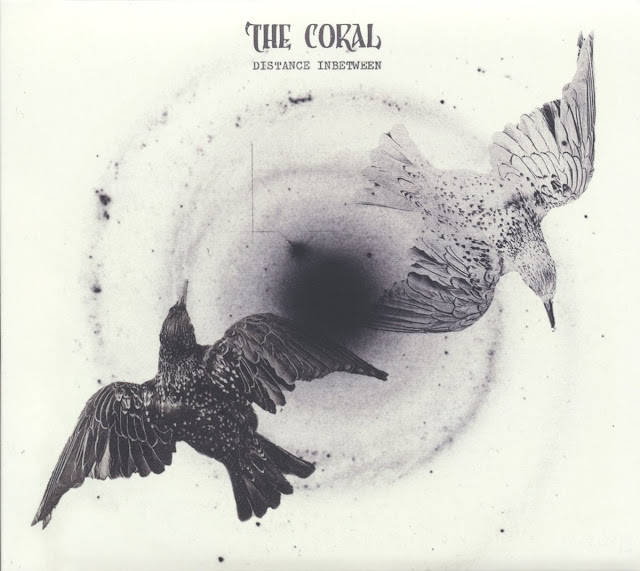 "Distance Between" is a triumphant return after a six year hiatus which has seen Liverpudlian neo-psychedelic scousers the Coral investigate all sorts of different musical avenues via various solo projects.

"Distance Inbetween" is The Coral’s first album of new original material since 2010’s "Butterfly House", following the 2014 release of their surprisingly great lost 2005 album, "The Curse of Love".

"Distance Between" is a worthy successor to "The Curse of Love"s more explorative approach, showing a band that have grown a lot in the six years since they were last in the studio together. The album was influenced by the books of Richard Yates, the graphic novels of Alan Moore, classic toys from the 1980s, Krautrock and Muddy Waters' "Electric Mud" album. The band have evolved considerably from the jangly, pastoral pop merchants of their earlier recordings with "Distance Between" exploing the trippy, Floydian psychedelia that drummer Ian Skelly evoked so successfully on his solo album "Cut From a Star", ably supported by bustling Krautrock influenced rhythms - particularly on opening track "Connector". "Before we started making the album we had discussed that we wanted it to be more minimal and rhythmical,” explains James Skelly. “We thought ‘if you've got a rhythm section that’s been playing together for almost twenty years, why not make that the centre of the songs?’"

Paul Molloy (ex-the Zutons, and now the other half of Serpent Power with Ian Skelly), must also take some credit for how great "Distance Inbetween" sounds, making his debut here as a member of the Coral, adding layers of his distinctive, spidery guitar work.

"Distance Between" is available on vinyl, CD and digital formats. Get it here (UK/EU), or here if you're nearer the US.