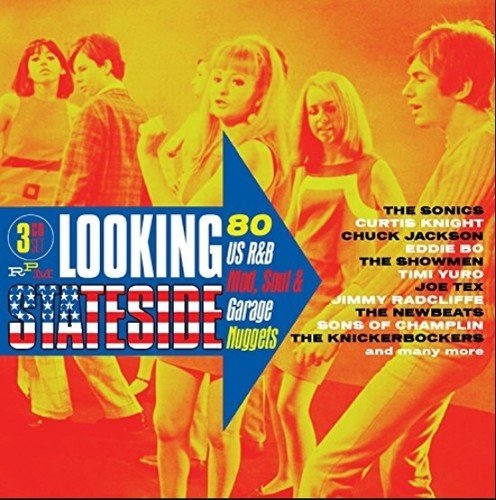 For those unfamiliar with RPM's "Looking..." series, this fourth entry is an excellent way to get acquainted. Focusing on Mod sounds of the early to mid sixties, the series mines some very deep cuts indeed, and is an invaluable set of tools for those seeking to prove that there was much more to the mod scene than the Who, the Small Faces, and white blokes covering Motown tunes, with previous volumes featuring (mostly) UK sourced freakbeat, Northern Soul and R&B gems, mixing acknowledged classics with more obscure cuts - many on CD for the first time, bafflingly so given their obvious quality.

"Looking Stateside" shifts the focus to the US, an interesting proposition given that Mod as a phenomenon was almost exclusively an English thing (at the time at least). So what we have here is 80 tracks worth of stonkingly rare, and more often than not, first-rate tunes that would have gone down a treat in early sixties Mod clubs like the Flamingo, despite the fact that most of the featured artists had probably never even heard the M word.

The early Mods certainly knew how to appropriate all of the right stuff. There's a hugely diverse mixture of top drawer material here. It's no wonder that it's been such a consistently enduring aspect of youth culture.

There are three crammed to the gills discs here, each focusing on a different aspect; disc one: R&B, soul and rock n roll, disc two: Northern Soul and disc three: garage, 60s proto punk and psychedelia.

Discs one and two are full of dance-floor friendly stompers with an alarmingly high hit-rate, but it's disc three that will presumably be of most interest to Active Listener readers. Genre fans will be familiar with some of this content, including well selected tracks by the Misunderstood, the Sonics and the Wailers, but even the most studious listener will be making new and exciting discoveries here. There are some garage standards for sure, the soulful, funky garage groove of Love Society's "Tobacco Road" being particularly good (and just wait for that long, sustained fuzz guitar to come in), but there are at least as many originals worth salivating over. The Knickerbockers (of "Lies" fame), prove that they were more than a Beatlesque garage combo with the appealingly soulful "As a Matter of Fact". The Brogues' brutal "Don't Shoot Me Down" makes an always welcome appearance. Then there's the International Bongo Band's "Congo" a bongo led jangle-beat fest that sounds like an early Animals number that's had the studio doors thrown open to a street party.

Obviously there's a lot happening here and much too much content to focus on more than a smattering of tracks before the readers eyes are likely to glaze over. Suffice to say that I could have randomly pulled any five or six tracks from here out of a hat and had the same enthusiastic response; it'd be entirely reasonable to expect a little filler amongst these eighty tracks, especially given how many are making their CD debut, but the compilers obviously have a well attuned set of ears. This is a thoroughly, and consistently enjoyable set of floor-fillers that made even my tired, under-slept feet shuffle involuntarily.

The whole package comes in an attractive clam shell box, with an extremely thorough 36 page book which will swallow much more of your time than you expect. Highly recommended.