The Driftwood Manor - Fraction of a Wolf 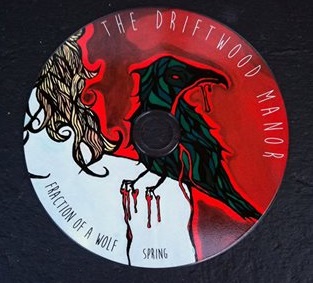 Reviewed and interviewed by Grey Malkin (The Hare & The Moon)

The Driftwood Manor, Eddie Keenan's consistently creative and evolving psych folk project, have to date released three superb and highly recommended albums and a clutch of equally essential EPs. This listener in particular spent many a dark and stormy night playing 2011's 'The Same Figure (Leaving)' album and a summer's day basking in the glory of their 2013 opus 'Of the Storm'. Now, just as the spring emerges a new Driftwood Manor single 'Fraction of a Wolf' is released as a precursor to their new long player 'For the Moon', due in June. The Active Listener were naturally keen to investigate further and to speak to Keenan about these new recordings and the themes and musical directions contained therein.

To begin with, the single itself. 'Fraction of a Wolf' begins with a tentative and haunting acoustic refrain as Keenan's naked voice emerges with a haunting sense of foreboding, recounting of ‘a fraction of a wolf carved, encased in wood, a god inside a splinter’. Beautiful, melancholy violin and strident drums add further layers of emotive resonance to an increasingly sophisticated and deeply impressive piece of psych folk. The Driftwood Manor have the rare skill of making a song like this sound both intimate and positively widescreen, wild and windswept. This may be down to Kennan's confessional yet emotive vocals which effortlessly carry the main melody of the song to begin with before a fiddle line joins to provide a seamless harmony. Not many have this capability; Bonnie Prince Billy perhaps, maybe Nick Cave and Mark Lanegan. Fans of those artists, plus those of The Walkabouts, Faun Fables, The Left Outsides and The Owl Service may want to take note and seek this release out. As the track progresses subtle banjo notes and electric guitar converge, deepening the musical palette as the drums propel the song forward to a sudden, heart stopping finale. Sonically expansive and rich in detail, 'Fraction of a Wolf' returns to the full, sweeping sound that The Driftwood Manor displayed on 'The Same Figure (Leaving)' but with an additional sense of power and urgency.

This single comes highly recommended, do not let it slip by; prepare also for 'For the Moon', it rises very, very soon.

And now for a chat with Eddie.

'Fraction of a Wolf' is a glimpse into your new album 'For the Moon' due in the summer of 2016. Can you tell us a little about the album and what to expect?

The new album takes a lot of different directions in terms of musical styles and instrumentation, but hopefully there's a cohesiveness there. You try and create common threads, as well as a story, and there's a recurrence of certain instruments, just used in a different context. It's still a folk album, in a wider sense, but there's a lot of other things going on. I always think of an album or EP as like trying to put together an exhibition, well, I imagine anyway! Sometimes the paintings seem completely different but you try to make them work together within the room. Also, the band has developed in terms of our live sound, and I think that comes through on the album. There's more percussion etc. throughout than on previous recordings.

Musically the single is rich and expansive featuring a whole array of instrumentation; previous album 'Of the Storm' felt like a more stripped back approach though was equally as effective, how would you describe the approach you have taken for 'Of the Moon'? What decides the nature and musical backing of the songs; is this suggested by the lyrics and do they follow after?

With 'Of the Storm' the idea from the start was to have a stripped back, raw sounding album. My father passed away during the writing and recording of the album so that influenced a number of the songs too. I wanted to create something fairly straight-forward. It actually ended up quite a bit more textured than I had initially planned.  I write new songs constantly so they sometimes coalesce into albums themselves, or seem to, and that was the case with that album. The whole thing was recorded periodically over four months so it was quite a quick process. With 'For the Moon' I wanted to do something completely different. I think every album you create should sound different to the last. If not then you're doing something wrong or are in music for the wrong reasons. As well as that, it keeps things interesting for yourself and the musicians you work with too.

There seems to be a distinct theme of nature in both the single and in the title of the forthcoming album (and indeed in previous Driftwood Manor songs); is this something which influences your writing? Sometimes there is also a suggestion of darkness and the supernatural (such as in the brilliantly unsettling video for 'That Lasting Final Hurt'), is this something that influences your music and lyrics and where do you take your inspiration from in general?

Well I grew up in the countryside on a farm so that was obviously a huge influence. I enjoyed spending a lot of time on my own as a kid so I had quite a vivid imagination I suppose and would often spend days wandering through nearby woods and exploring abandoned houses. That's probably where my fascination with the supernatural came from too. It's always been something that's interested me and still does, although I believe that if there is genuine paranormal phenomena out there then it's essentially science that hasn't been explained yet. Quantum physics is stranger than any ghost story. I'm a bit obsessed with it, I don't really understand it but no-one does.

Some people have a very benevolent view of nature, and so they should in some ways, it gives us life. But it can also be merciless and that interests me too. Cycles of nature and how they relate to our everyday lives in subtle and less subtle ways are interesting. Fraction of a Wolf relates to that and uses a wood carving that my friend (the artist Aoife Doolan) made for me as a start-off point for exploring that and various other themes. Recently I haven't noticed as many elements of nature in my songs, so maybe I'm moving away from that, although it's always something I'll always come back to in some way.

What else can we expect from The Driftwood Manor in 2016? Do you have plans for live dates?

Yes, we'll be launching the single Fraction of a Wolf in Sweeney's, Dublin on March 4th and are lining up quite a few other dates including Roisin Dubh in Galway on April 4th. The album will be released in June so we'll be performing at festivals etc. during the summer in Ireland and hope to take in some dates in England during the year.