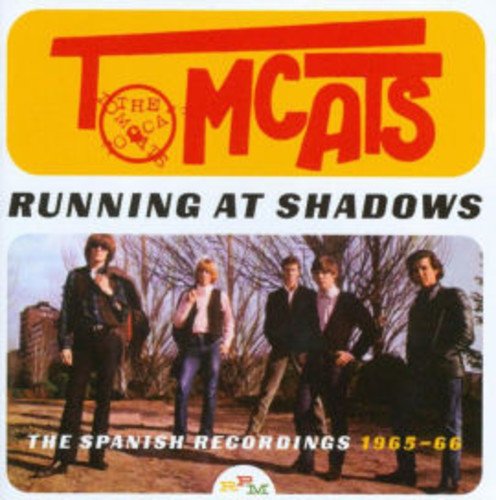 I'm sure that the majority of you will be intimately familiar with July, an Ealing based psychedelic band who released a classic self titled album on the Major Minor label in 1968 with a heavy Beatles / Floyd / Kaleidoscope (UK) feel to it - now a major collectible and an extremely well regarded album in its own right. Less will realise that many of July's members had been kicking around in bands since the late fifties. Formed from the nucleus of two bands - the Tomcats and the Second Thoughts (who featured a pre-Nirvana Patrick Campbell-Lyons on vocals), the final line-up of the Tomcats immediately preceded July, with an almost identical line-up of Tom Newman, Chris Jackson, Alan James, Tony Duhig and Jon Field.

After some local UK success the Tomcats decided to try their luck in Spain, where they were treated as a sort of surrogate Rolling Stones - the Stones themselves being banned in Franco era Spain along with a number of other bands deemed to be 'dangerous' by the authorities. The Tomcats took advantage of this and released four successful EPs over 1965 and 1966 which, along with a few rarities and tracks recorded by the Second Thoughts, make up this fine new collection.

Those hoping for more of July's psych pop won't find it here - the band weren't exposed to any psychedelic influences until they returned to Ealing in 1967-1968 - but those with a penchant for moody R&B and beat will find this a rewarding listen.

It's heavy on cover versions, as one would expect from a band who were essentially providing big hits recorded elsewhere in the world  the chance to get past Spain's borders. The Rolling Stones covers are certainly interesting. While they're no substitute for the originals, they don't try to purely replicate them either, so there are a few surprises to be had with a sitarless "Paint it Black" being more than the interesting novelty that it should be. Standards of the time like "Cocaine" and the Yardbirds' "For Your Love" also get surprisingly spirited and gritty treatments, with the Tomcats' version of "Roadrunner" being particularly definitive. There's also an enjoyably rough and ready take on "Monday Monday" infused with plenty of garage spirit and appeallingly ragged harmonies.

Originals are in short supply but the moody title track proves that the songwriting prowess showcased on "July"didn't just manifest overnight, while the anthemic "It Ain't Right" features startling acid guitar work which would sound right at home on a West Coast US export of a similar period. Even better are the traditional Spanish folk songs which the band give the beat treatment. I'm not certain how well known these songs are outside of Spain (any Spanish readers care to let us know?) but they're all new to me and pretty exciting in their own right, particularly the wild freakbeat of "A Tu Vera" and the percussive, fuzzy "Pena, Penita, Pena"- probably the two most potent tracks here.

Archival collections like this often feel like unnecessary footnotes, especially when greater things are to follow from its contributors. That, happily, is not the case here. While the exhaustively complete nature of "Running At Shadows" ensures the odd dip in quality, this has more than its fair share of gem, especially for a collection that doesn't cherry-pick its contents.