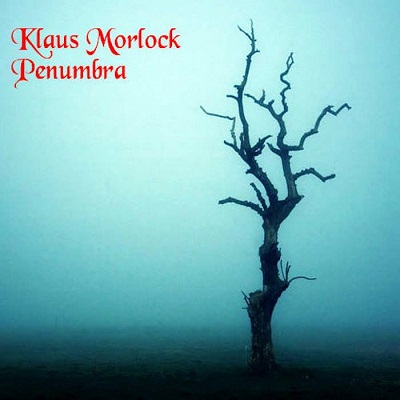 Following the unsettling electronic majesty of 2014’s début ‘The Bridmore Lodge Tapes’ and his beautifully melancholic sophomore album, ‘The Child Garden’, Klaus Morlock slips once more out of the shadows with this new release, ‘Penumbra’. Like previous work there is an intriguing back story to the recording; herein lies a musical interpretation of the tale of Molly Kingston, a 17 year old Londoner who vanished with warning only to be heard of again by way of a mysterious letter stating she had joined a ‘celestial’ group named Penumbra. Furthermore, it was written that she had ‘attained the highest spiritual bliss’ and ‘had acquired the long sought after ability’ to enter and harvest the dreams of those deemed ready and susceptible. Indeed, the letter informed, this is what had happened to Molly and accounted for her disappearance. And then others started to vanish. In each case a similar letter was the only explanation or their sudden vanishing and in this letter they claimed to have been met and ‘harvested’ in their dreams by both Molly and her sinister sounding dream twin Ladybird. This back story alone is enough to give any listener the shivers; that the music is equally haunting and affecting will come as no surprise to those who have fallen under Morlock’s spell with previous albums.

The album opens with 'Arrival', the eerie and looped sound of woodwind and piano offering a gentle but slightly off kilter refrain amongst the crackle and buzz of an old phonograph. Like a decaying dream or sepia photograph this is reminiscent of an old and vaguely uneasy memory, in much the same way that the more pastoral elements of classic 70's soundtracks such as 'Let's Scare Jessica To Death' or 'Suspiria' can be. A solar wind enters as a sombre and mournful cello takes centre stage, followed by a host of spectral voices and keys which float and linger lysergically, a ghostly lament. This composition is incredibly intricate and is clearly carefully put together to achieve the greatest emotional impact and the surest and subtlest of atmospheres. It is a testament to Morlock's muse that the piece remains delicate, restrained and all the more powerful for this; he hints at the horror lurking underneath rather than over doing or over emphasising the element of terror, thus masterfully controlling the suspense. Next, 'With Ladybird' soars with a hypnagogic, dreamlike quality, an analogue synth solo that evokes the finest works of Tangerine Dream and Cluster. The track then morphs into a haunted slice of harpsichord led darkness, each note gliding with crescendo through a spectre filled dreamscape until the sound of rain descends and solitary piano picks out a chillingly memorable melody. Mellotron strings build and layer around the piano in a choral and darkly angelic fanfare; a genuinely heartstopping moment. Fans of Belbury Poly, Keith Seatman and The Advisory Circle would be well advised to seek this out immediately.

'Lovely Molly' creeps into view with a murmer of voices, howling wind and some truly beautiful plucked harp and synth strings. Raising the hairs on the back of this listener's neck, this track ably balances the gorgeous vintage keyboard reverie with a deep sense of yearning and wraith like creeping unease. The mellotron strings that then appear are both utterly unearthly and majestic, raising things to a cosmiche and King Crimson-esque peak before some deeply acid folk flute takes us once again into a sepia, 70's hued world, the disconcerting reverberating conclusion of which stays with the listener long after the song has finished. Indeed there is something of an electronica based vision of 70's wyrd folk and folk horror soundtracks here; something urban perhaps but also with a hint of 'Lemora' or 'Valerie And Her Week of Wonders', an otherworldly gothic and surreal sense of terror. 'The Chamber Of Lost Dreams' the album's (or mini album's) closer begins with with a rasping doom laden synth note before a carnivalesque loop filled with backwards sounds begins its twisted carousel. Any revelry takes a decidedly (and pleasingly) disturbing turn as the backwards melodies seep through, creating a track that truly sounds a though someone is picking their way through your dreams and turning them back and forth in their fingers. Moans and sparkling synth lines take over, reverberating and echoing outwards as the electronic symphony ascends further and further into the ether. Suddenly, there is silence save for some unearthly bells and backwards sounds; then the most melancholy and beautiful descending melody appears, xylophone and picked guitar following its central motif. If this had been released accompanying a film of pastoral terror in the 70's this soundtrack would be rightly revered as an all time classic with copies of the original on vinyl going for vast sums. Treat it as such; this is a masterpiece and stands head and shoulders above most contemporary and 'classic' soundtracks to horror, wyrd and psychotronic cinema.

Here then is another masterpiece of spooked electronica, of sophisticated and carefully wrought drama, suspense and tension. The composer himself is a shadowy figure with little known about him save that he has been involved in several of the last few years most essential electronic and hauntological releases, be it The Unseen’s ‘The Goatman’ soundtrack, his previous two long players or his forthcoming appearance on surrealist soundscaper So There’s imminent new album. What is known is that his name indicates that listeners are due to be rewarded with a special and spectral slice of vintage electronics and a soundtrack that will live in, indeed harvest, your dreams for many nights to come.

Available now as a ‘name your price’ download at Klaus Morlock’s Bandcamp site, do not miss out.