Foxpockets "Hope Can Make Feeble Ones Earnest and Brave" 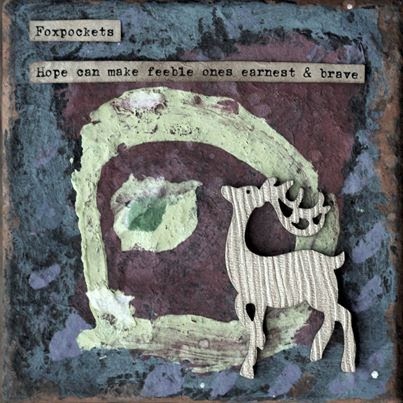 The return of Brighton’s Foxpockets after a three year gap since their debut album ‘The Coracle And The Albatross’ has caused a fair degree of excitement across ye olde internet and for good reason. Their debut was a truly magical and utterly unique take on folk, all obtuse angles and unpredictable directions. Their second long payer ‘Hope Can Make Feeble Ones Earnest and Brave’, this listener is pleased to report, is no different (in that it is completely different from anything else out there). It comes as no surprise that the band list hibernation, taxidermy, crochet, farming and anatomy amongst their interests; Foxpockets are like no other.

Album opener ‘I Draw My Map’ begins with an almost Tiger Lilllies-esque cabaret stomp; harp and double bass picking up the pace along with Katherine Simner’s understated yet bewitching vocals. At once unexpected and exhilarating (this song, however polite, is a full blown tour-de-force) Foxpockets position themselves once again as one of British folk’s most inventive and truly unusual bands.‘Knacker’s Yard’ is a more refined, delicate lullaby of aching accordion and whispering harp whilst ‘Oh the Night’, an Eastern European styled paean to lost love, has a slightly sinister, vampiric edge not unlike some of Mikelangelo and the Black Sea Gentlemen’s output. With lines such as ‘There’s a sense of desperation lingering in these woods....’ we are left to our imagination as to the horrors that could be going on in the cottage in the middle of the dark forest. ‘Buried Moon’s cascading and fairy-tale like harp (the best description for Foxpockets is perhaps ‘fairy tale-esque’ – they are the ideal aural accompaniment to the stories of the Brothers Grimm or Perrault) conjures up a moonlit and magical landscape albeit with a hint of the disturbing and a thimble of melancholy.
Indeed the instrumentation on the album itself is used with a sense of storytelling and with genuine effect; banjo and glockenspiel pluck and shimmer through the pages of Foxpockets dark and demented dreamscapes whilst violin, spoons and pipe add texture, menace and wonder. ‘Village Green’, with Samuel J Tetley taking over vocal duties, is a warmer affair; the click of spoons and timeless charm evoking an English Hamlet of top hats and frock coats. ‘Mess of Feathers’ further delves into a world where nothing is quite as it should be; Simner’s plaintive vocals perfectly framing the weird tale therein. The dreamy yet unsettling waltz of ‘Bones, Charred Bones’ remind one of French band Odland, the accordion rasping around the procession of banjo and plucked harp; descriptions of mildew and ‘bitter cold rain’ adding an otherworldly and dank, eerie taste to proceedings. Tom Waits himself would be proud to have come up with a shanty such as this.
‘Cephalophore’ creaks into life before it begins a stately and properly epic instrumental march of harp and drums that is utterly spellbinding. Reminiscent of such classic Czech cinema soundtracks as ‘Valerie and Her Week of Wonders’ and ‘Mala Morska Mila’, this is equally timeless and yes, fairy tale-like. Album closer ‘Drag the Forest Down’ is a warm and rich message to a lover framed in twinkling glockenspiel and stirring strings, the protagonist promising…’I’ll drag the forest down to you’. It’s a sweet and simple end to an album that virtually carries you off to a strange and bewildering yet inviting otherworld. There is no-one quite like Foxpockets. I suspect witchcraft may be involved….

Quick off the draw purchasers will be rewarded with a superb free live EP so make haste. The album itself (as is usual with Reverb Worship) comes in a limited, numbered and beautiful handmade sleeve featuring photographed materials and a rather delightful stag. Keep an eye out for the reappearance of their long sold out debut later in the year too. Once upon a time there was Foxpockets. Follow them down the rabbit hole, into the forest and across the air….