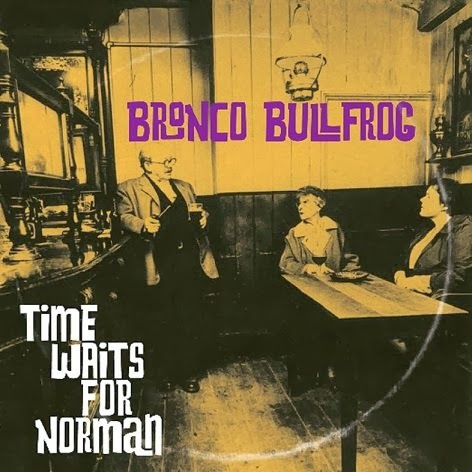 Following up on our look at the new Schnauser 7", there are another couple of notably great releases coming out on the same day from the busy Fruits de Mer Records label which I'll hit you with over the next few posts.
Bronco Bullfrog released a fabulous single last year on State Records (Clarifoil / Never Been To California) which I played to death and always intended to review glowingly, but one thing led to another, or in this case led to nothing, and it got buried in the to do pile and never eventuated. These sorts of things happen when you're sent 20-30 things a week to review, and have time to review 4 or 5 on a good week. Now that another of their excellent singles has made its way onto my desk I must pull finger however, and this one is even more deserving. Three tracks this time with two originals and a cover of the fab Sands B-Side "Listen to the Sky" which you've probably been acquainted with via the Nuggets II box set.
If you're not familiar with Bronco Bullfrog, they're a three piece U.K outfit with a back catalogue that sounds like it's been plucked straight out of an alternate reality 1967 - think U.K folk-rock / pop of the type that was aware of its psychedelic surrounds, but never overpowered by them - the Kinks and Small Faces come to mind.
The title track follows in the grand tradition of U.K pop psych character studies and would have fit in nicely among the Harry Braffs and Arnold Laynes of the '67 airwaves with it's Who-style "Quick One" backing vocals and a lovely respite provided by an unexpectedly delicate bridge.
"Rocking Horse Mender" is a very open Kaleidoscope tribute, the sort of influence worn on sleeve tribute that a label like Fruits de Mer allows an artist the freedom to pursue where a larger label would likely step in. It pays dividends too as this richly exploits the same sort of nursery rhyme simplicity as "Mr Small, the Watch Repairer Man". It should come across as hopelessly twee but has such a delicacy of touch, not to mention a pretty special change near the end of the chorus that provides a visceral connection completely unexpected from such a fragile piece.
"Listen to the Sky" on the other hand is pretty damn gritty and extremely faithful to the original - at least for the first part, then it ditches the mock dogfight and Holst conclusion of the original in favour of a propulsive build that helps it reach a potential that I hadn't realized the original was lacking until now. After a few listens it sounds so natural that the original now sounds tacked on and wrong to me. Damn you Bronco Bullfrog!