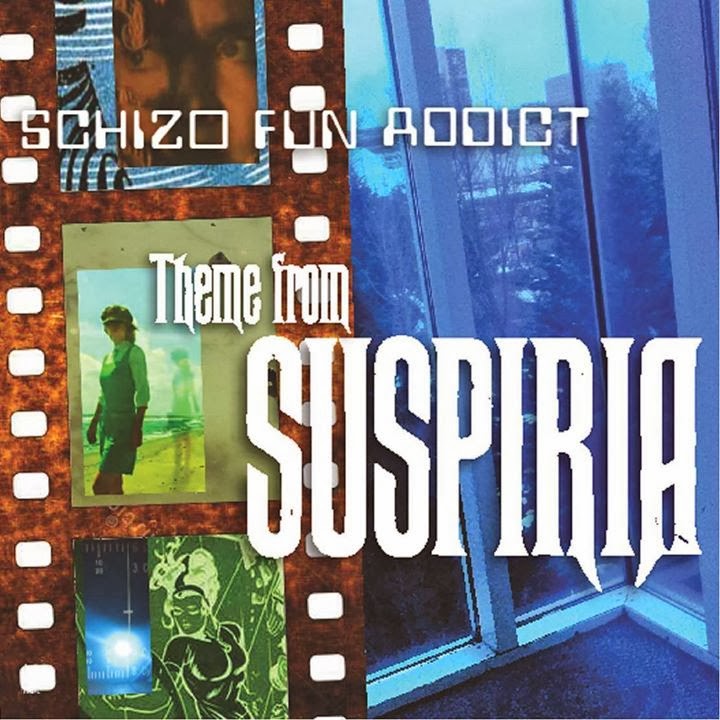 And now the last of the March Fruits de Mer releases that I'm going to guide you through is this excellent cinematic offering from Schizo Fun Addict.
I'm firmly of the opinion that Goblin's "Suspiria" is one of the best pieces of music ever written (and won't be swayed on that, so don't go trying), so the decision to cover said masterpiece shows that Schizo Fun Addict have both impeccable taste and balls to spare.
Ripped off by many (especially recently), but covered by comparatively few, they have the good sense to realize that the original is pretty much unbeatable in terms of mood and that any successful cover is going to need to be one hell of a reinvention, and so it is here. Starting off innocuously enough with piano and then some sort of harpsichord synthesizer carrying that familiar refrain, it's not long before there are oscillators flying around worryingly, creepy lalas ala "Profondo Rosso" and funky breaks that could have graced a vintage Deodato LP. There's even one point where it threatens to turn into the Doctor Who theme.
Stripped of tubular bells and whispering witches, this is a pretty fun alternative to the original. If Goblin had been listening to Brian Hodgson rather than Mike Oldfield then their version could have potentially sounded like this.
The flipside is a much lighter affair; "In The Long Run" originally performed by the fictional Carrie Nations for the soundtrack to the film "Beyond The Valley of the Dolls" was improbably composed by Stu Phillips (better known for pompous space fare like Battlestar Galactica). Despite this, the original is a memorable piece of late sixties girl pop, only occasionally troubled by an overwrought vocal delivery. The Schizos tone down some of the more dated aspects of the original in their sixties pop filtered through nineties indie arrangement with bands like St Etienne and Belle and Sebastian coming to mind, especially when the tasteful trumpet accompaniment winds its way around the vocal melody.


THEME FROM SUSPIRIA by Schizo Fun Addict from jet wintzer on Vimeo.