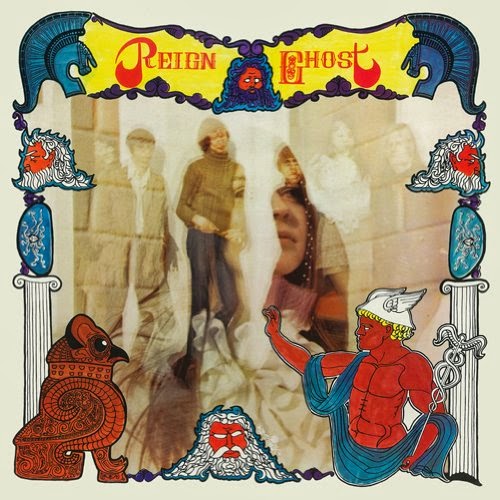 Extraordinary Spanish label Guerssen continue their mission to reissue every worthwhile piece of obscure psychedelia on vinyl unabated with the pick of this month's impressive crop being Canadian band Reign Ghost's self titled debut (their more challenging followup is also reissued this month).
Originally released in 1969 and influenced by the San Francisco school of exploratory psychedelic folk-rock, the dual male and female vocals inevitably lead to a Jefferson Airplane comparison. Where Reign Ghost differ from many other also rans of the time is in the inventive instrumental work particularly the fuzz guitar and organ interplay - if these guys were inspired by the Airplane (which seems likely), it's the Airplane of "After Bathing at Baxters" rather than that of the more concise and 'easy' "Surrealistic Pillow".
Lengthy explorations like "Eyes Knows, So Does Ears and Carolina" prove that they've got the chops to expand minds in the prescribed fashion while vocalist Lynda Squires digs her hooks into the memorable hooks of more melodic folk rock fare like "A Long Day Journey".
If it weren't for Plastic Cloud's self titled debut, I'd rate this as the finest psych LP to emerge from Canada in the sixties, and if you're going to play second fiddle to anything, that's an entirely respectable album to be trumped by.
Essential for San Francisco style psych folk-rockers. You know who you are.